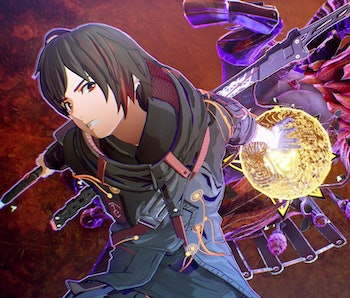 As the shift to a new console generation begins, some things change like graphics, performance, and teraflops while other things — like Bandai Namco Entertainment routinely releasing anime video games, remains the same.

Scarlet Nexus, an anime-styled apocalyptic sci-fi game that brings to mind the stylish setting of Persona 5 and the action-driven combat of Genshin Impact, releases on Playstation, Xbox, and PC in Summer 2021.

Here’s everything we know about Scarlet Nexus.

When is the Scarlet Nexus release date?

Scarlet Nexus’ precise release date is currently unknown, but a new trailer shown at The Game Awards on December 10 revealed the game will release in Summer 2021. That means roughly June, July, or August 2021. August tends to be a rather fallow month on the release calendar, so we're willing to bet it'll fall in the first two months of that window.

What platforms will Scarlet Nexus be available on?

What is Scarlet Nexus’ story?

Scarlet Nexus takes place in the distant future when scientists have discovered a method to grant humans psychokinetic abilities, allowing them to control all sorts of things with their minds from energy to objects. This occurs just as humanity is facing an invasion from mutants known as “Others,” who hail from the sky. Others are immune to conventional weaponry, leaving those with psionic abilities as Earth’s last defense. In response to the invasion, a task force called the Other Suppression Force has been formed. The group is chock full of psychokinetic ability-users who fight to stop the invasion.

You play as a new OSF recruit, Yuito Sumeragi, who while learning about the world, might learn a little about the truth behind these fantastical new abilities.

Is there a trailer for Scarlet Nexus?

At The Game Awards on December 10, Bandai Namco revealed a new trailer for Scarlett Nexus that suggests the game will have a Evangelion-like plot device, where a group of attractive teenagers are mentally and physically linked to some sort of pernicious technology that allows them to fight a supernatural threat.

The game's frenetic, action-oriented combat is on full display here, and the latest trailer also reveals that there will be two playable characters, who experience separate elements of the single-player story. It's likely that both the male and female protagonists will have slightly different movesets. We don't yet know the connection between these two characters, or the exact nature of the threat that faces their world, but it's certainly intriguing.

You can check out the previous reveal trailer for Scarlet Nexus below:

From it, we learn that “Others” can come in all shapes and sizes. Some appear to be quite large and they’re not limited to specific rules. One Other in the trailer featured full-on blooming flowers on their anatomy, while that was missing from other characters. We also learn that the others are perhaps aliens.

The trailer gives us an idea of the gameplay, which seems inspired by the combo-based systems of Devil May Cry or Bayonetta. Each character has a different close-range attack ability and they each fight in different ways with their various powers.

We also get a look at other abilities. Some characters can multiply, others can create elements like electricity or fire. So the scope of these supernatural abilities appears to be quite vast.

Who is developing Scarlet Nexus?

Scarlet Nexus is being developed by Bandai Namco Studios, the publisher’s internal team. Specifically, it’s being headed by folks who previously worked on the Tales Of series. Although Scarlet Nexus isn’t a turn-based RPG, this should still provide some confidence in the title.

Does Scarlet Nexus have an English dub or a Japanese voice track?

It has both! The English trailer features dubbed voice-overs, while the Japanese trailer had a corresponding voice. If previous BANDAI NAMCO Studios titles like Code Vein are any indication you should be able to switch between the two through a settings menu once Scarlet Nexus launches.

This article was originally published on May 19, 2020