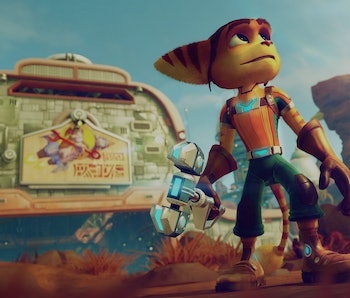 Despite reigning supreme during Sony’s PlayStation 2 halcyon days, the company’s animalistic mascots have had a pretty tough time surviving in the modern era of gaming. Jak and Daxter have been reduced to only appearing in crossovers; Sly Cooper has had a TV show in development hell for the last four years, without a new title in site; Ratchet and Clank, while more successful than its contemporaries, has found middling results with modern audiences. Even Crash Bandicoot, who's been on the wish lists of many gamers for inclusion in Super Smash Bros. Ultimate, can't catch a break.

In 2016, Sony attempted to reboot Ratchet & Clank with an animated feature film based on the first game accompanied by a modern re-imagining of same game but developed by Insomniac Games. While the movie bombed both financially and critically, the associated game found the opposite reaction, gaining affection from critics and fans alike.

Almost four years later, fans on the hook hotly awaiting a follow-up. Will another Ratchet & Clank game be released? And if so, when? Will it follow the original games? Here's all that and more.

When is the Ratchet & Clank 2 release date?

According to industry expert Collin Moriarty, while speaking on his Playstation podcast, Sacred Symbols, a Ratchet and Clank sequel will debut before Sony's follow-up to Marvel's Spider-Man. Moriarity suggested it could be a PS5 launch title, which would place the release date in time for holiday 2020.

Conversely, other reports have implied Sony’s (and therefore Insomniac Games’) biggest priority is following up Spider-Man. Were a new Ratchet and Clank to be released with PS5's launch, that would allow Insomniac to move straight ahead with crafting Spider-Man specifically tailored to next-gen consoles, freeing up any team that was working on the Lombax third-person shooter game previously.

By all accounts, the earliest possible release date is probably late 2020.

Will Ratchet & Clank 2 be available on PS4?

Maybe? Xbox has been very publically championing backward compatibility between their Xbox One and the upcoming Xbox Series X. It's possible that Sony will feel inclined to do the same. Currently, Ratchet and Clank 2 is only rumored as a PS5 launch title. If it exists, the title may only be available on next-gen platforms. But it's also possible that Sony might release it simultaneously for both platforms. We can't imagine that the game will need to make full use of PS5's hardware to run efficiently.

Who will develop Ratchet & Clank Re-imagined 2?

Insomniac Games, presumably. Although the developer has previously given the franchise to other studios like High Impact Games, who worked on both PSP spin-off games, Insomniac always develop the core titles in-house. It seems likely that Insomniac Games will develop any further main Rachet & Clank games.

What will Ratchet & Clank 2’s story be?

Assuming they continue the rebooted narrative that began with Ratchet & Clank PS4, the series can go in a few different directions. A brand-new story could combined elements from the original trilogy and the Future sub-series.

More likely, however, is that Insomniac will re-imagine the second title in the original series called Going Commando. The first remake set up the plot of Going Commando in numerous ways. Firstly, Megacorp, the company at the core of Going Commando’s plot, was introduced, being mentioned by other characters and appearing on billboards throughout the galaxy despite being absent from the central story. Secondly, the re-imagined game mentioned Thugs-4-Less, a group of villains from the second game, on multiple occasions.

Some naysayers might bring up Captain Quark. In the original Going Commando game, Quark provided the story’s inciting incident and controlled the narrative, acting as the evil mastermind behind it all. However, his villainous arc seemingly wrapped up with the first re-imagined game, leaving him with little to no motive for returning to a life of crime. So for a sequel to resemble Going Commando at all, it would probably have to shift the plot in different ways.

Despite lacking motive, a supposed Going Commando could still feature Quark were he to be influenced by outside forces, say Dr. Nefarious. Ratchet and Clank’s long-time big antagonist was pre-emptively introduced in the first game as an organic lifeform. He could become the controlling force behind the curtains in the second re-imagined title, setting up for him to fully take center stage in a possible third re-imagined game, based on the original series game, Up Your Arsenal.

Ratchet and Clank 2 is rumored to launch with PS5 in Holiday 2020.

More like this
Gaming
8.4.2022 7:11 PM
10 new games to grab ASAP from the PlayStation Summer Sale 2022
By Robin Bea
Gaming
17 hours ago
10 wild and weird characters designed in Saints Row Boss Factory
By Hayes Madsen
Gaming
8.15.2022 2:30 PM
You need to play the best video game remake ever on PS Plus ASAP
By Hayes Madsen
Related Tags
Share: