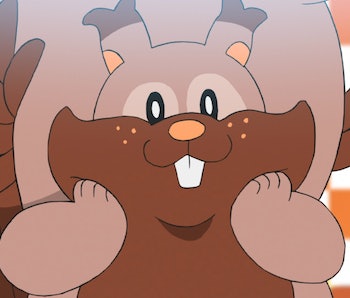 Spooky season is in full swing. Pokemon Unite's Halloween event transforms the free-to-play battle arena game with an eerie new atmosphere that includes festive costumes and themed attacks. Tencent and The Pokémon Company’s MOBA has maintained a strong community since it launched for Nintendo Switch in July and mobile devices in September. To spice things up, developers are running a themed event like Overwatch’s Halloween Terror that redecorates the game with unique environments, skins, attacks, and even a tricky new Pokémon.

When are the Pokémon Unite Halloween Festival start and end dates?

Is there a Pokémon Unite Halloween Festival trailer?

Yes, there is! A trailer unveiling the event was released on October 18 and teases all of the changes and additions the Halloween Festival brings. Check it out above.

Who is the new Pokémon Unite Halloween Festival Pokémon Greedent?

Greedent from Pokémon Sword and Shield will make its Pokémon Unite debut on October 20, the first day of the festival. It certainly isn’t a popular Pokémon, continuing Pokémon Unite’s trend of spotlighting some lesser-loved Pokémon.

In the mainline games, Greedent is a Normal-type Pokémon with an ability that lets it restore health whenever it eats any berry. It also has an exclusive move called Stuff Cheeks, where it raises its defense stat by two stages after eating a berry.

What are the Pokémon Unite Halloween Festival skins and other cosmetics?

While we have not gotten a complete list of new cosmetics or patch notes yet, we see many of the Halloween Festival’s new additions teased in the trailer. To start, the game’s stages will get a visual update to look spookier.

We can expect a lot of new cosmetics for Pokémon, with the trailer highlighting a cloak and pointed hat for Lucario, a beanie and scarf for Charizard, pajamas for Wigglytuff, and more. Trainers will also get new clothing like a Pikachu pumpkin mask, a witch’s hat, a candy bag.

Some of Lucario’s moves are reskinned to feature pumpkins while he’s wearing the new outfit. It remains to be seen if this is limited to the event or new cosmetic upgrade players can purchase. Halloween-themed stickers, backgrounds, frames, and poses for your Unite Snapshot are all coming to the game as well.

We’ve never seen an event quite like this in Pokémon Unite before. If it’s good, it could set a precedent for all future events to follow.