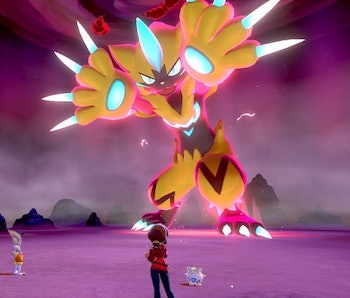 Pokémon Sword and Shield’s addition of Max Raid Battles and Pokémon Dens have extended the game’s lifetime indefinitely, and The Pokémon Company has added a very special Max Raid Battle to the game to help celebrate the release of the Isle of Armor DLC.

The latest event brings Zeraora, the Generation VII mythical Pokémon to the fray. They’re not catchable, but defeating them is essential in obtaining a Shiny Zeraora along with numerous free pieces of Armorite Ore, which can be used to farm Watts.

Let’s all gather around a local Pokémon Den to earn a Shiny Zeraora.

How good is Zeraora in Pokémon Sword and Shield?

If you played Pokémon Ultra Sun and Ultra Moon, you might know Zeraora as a nary unattainable stud-like Pokémon that only reared its head during events. Zeraora is an Electric-type mythical Pokémon that boasts having the tenth-highest speed stat of all Pokémon, sitting at 143 Speed. In clearer terms, they’re extremely fast. No matter your set-up, Zeraora is an essential boon to your party.

Additionally, Zeraora has enviable offensive abilities with 112 Attack and 102 Special Attack. It can be the perfect vanguard for your competitive team, leading the charge to quickly defeat enemies. Zeraora’s move pool is varied enough to play a lot of roles for your team.

You’ll ideally teach the electric attack Volt Switch at Level 32, then Plasma Fists at Level 88, and finally Close Combat at Level 96. Use TR77 to teach them Grass Knot as well. With all four moves, you’ve primed a Zeraora perfect for any team.

Zeraora will only be available within Max Raid Battles from June 17 to June 28 at 8 p.m. Eastern. It’s worth noting that this event is happening concurrently with a Gigantamax Festival event that brings back nearly every Gigantamax Pokémon to ever grace Sword and Shield previously.

How to add Zeraora to your Pokémon Den rotation

Before you can begin your hunt for the Thunderclap Pokémon in earnest, you have to add the event to your game. Open your main menu by clicking the X button then head to the Mystery Gift option. Once there, select “Get the Wild Area News.” Doing so will update your game to include Zeraora as a possible spawn within the Wild Area.

How to find Zeraora

Having activated the Wild News, Zeraora will now be randomly available within active Pokémon Dens emitting red or purple lights. Zeraora will be available in dens that feature between three and five stars. Once you encounter them, you'll see a silhouette similar to the one featured below.

If you’re having trouble finding a one, try using the Pokémon Raid Exploit to force one into existence.

How to defeat Zeraora

Before confronting the Thunderclap Pokémon with the longest body around, make sure to strengthen your favorite Ground-type Pokémon, as it’ll have double effectiveness against Zeraora. Make sure not to try using any Electric-types because Zeraora is immune to such attacks. Zeraora also has a resistance to Steel and Flying-types.

Now it’s up to you to put your best foot forward and defeat the behemoth!

How to claim your Shiny Zeraora

You might notice after you’ve won that Zeraora wasn’t catchable. Perhaps this caused a bit of frustration, as it should. Don’t fret, your work wasn’t for naught. Zeraora is part of a special event happening to celebrate the release of the new DLC. After one million players defeat Zeraora, you’ll be able to claim a Shiny version of the Pokémon. The masses have actually succeeded in doing this already. According to a June 23 update from the Japanese Pokémon twitter, the number is at 1.4 million.

Although Zeraora has already been unlocked, there are stretch goals for the event. For every extra 100,000 defeated, players will be gifted one piece of Armorite Ore. At the current revealed count, we're all getting four free Armorite Ore pieces.

Now that the event has been won, how do you claim your Shiny Zeraora? Well, you can't just yet. You'll need to wait until June 30, when the event actually concludes to claim the Pokémon.

Once it's officially over, open the Pokémon Home app on your Nintendo Switch. Trade one Pokémon between a copy of Pokémon Sword and Shield and Pokémon Home using the Switch app. Then head to the mobile app.

Click the Mystery Gifts section, found on the Mobile app by clicking the hamburger lines then the gift icon on the bottom left-hand corner. On June 29 , a shiny Zeraora will be there waiting for you. The Pokémon will remain available until July 6, make sure to claim it by then. You'll need a Pokémon Home account to claim it and to have deposited at least one Pokémon, which can be performed with a free account. If you're having trouble connecting your game to Pokémon Home, please check out our extensive guide on the matter.

Pokémon Sword and Shield: Isle of Armor is available now for Nintendo Switch.

More like this
Gaming
8.4.2022 3:00 PM
Everything you need to know about Pokémon Scarlet and Violet
By Hayes Madsen, Willa Rowe and Joseph Yaden
Gaming
8.15.2022 5:16 PM
You need to play the best vacation sim since Animal Crossing ASAP
By Hayes Madsen
Gaming
3 hours ago
10 years later, the Nintendo Wii's most underrated RPG is due for a remake
By Hayes Madsen