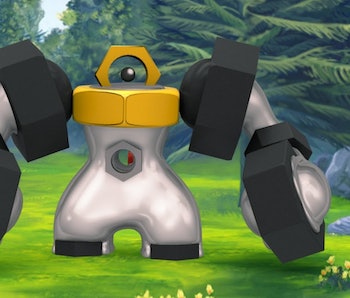 While many see Pokémon Home as just a simple way to transfer compatible Pokémon from previous games into Pokémon Sword and Shield, the new cloud-based app also includes a robust suite of trading features that will allow players to acquire the Pokémon they want in totally new ways.

Out of all of these features, the Wonder Box feels like the most surprising, confusing, but also potentially useful — especially because you can do it all from your mobile phone.

What is the Wonder Box, and how can you get the most out of it? Here's all that and more.

The in-app explanation for Wonder Box doesn't help clarify what this feature is capable of. The helper character Poke Boy tells players, "If you want to try a different kind of fun and exciting Pokémon trade, then you should try using the Wonder Box ... Choose a Pokémon you want to trade, and put it in your Wonder Box!" Then ... what?

"After a bit of time — you never know just when — your Pokémon will be traded for another player's Pokémon from their own Wonder Box," he says.

Cutting through the painfully simple and vague description: The Wonder Box is the most random way to trade Pokémon in the game because it finds another player also using the Wonder Box and swaps their Pokémon with the one you put forth. As such, it functions similarly to the Wonder Trade feature present in the Pokémon games for 3DS. Except this one comes with a delay.

How to use the Wonder Box in Pokémon Home

To start, you'll need to navigate to the Wonder Box within any version of Pokémon Home, which you can find in the trade tab. Click on the plus sign icon (+) over one of your empty boxes and choose which Pokémon you want to put in there. You should start out with a Pikachu automatically, so it is a good one to test this out with. If you decide you no longer want to Wonder Trade a Pokémon for some reason, just tap on them to get the option to remove them from the Wonder Box.

If you are using the free version of Pokémon Home, only three Pokémon can be put into the Wonder Box at any given time. For Pokémon Home Premium members, that number skyrockets to 10! After you choose which of your comrades to send off, you'll just have to wait an unpredictable amount of time before a match is found and the trade kicks in.

Unfortunately, the Wonder Box isn't as immediate as Wonder Trading was in the 3DS games, and it likely won't be helped by first-week server woes. Still, whatever Pokémon you put in the Wonder Box should eventually be sent to another app user who could then do whatever they please.

Why use Wonder Box?

The Wonder Box may not initially seem that useful but it actually can be used for some cool things. For example, you can gamble to get a really powerful Pokémon for your weak one just like with Wonder Trading. While it's unlikely that another Pokémon Home user will be willing to comply with your offer to trade a level 1 Sunkurn for their level 100 Necrozma, that kind of trade is possible with the Wonder Box. Players putting up powerful Pokémon risk getting nothing good in return, but those offering weaker Pokémon will have a lot more to possibly gain as the service progresses and more Pokémon enter its ecosystem.

On a more heartwarming note, it can be used for special events to help newer players. It has been well documented that players will send out certain types of good Pokémon to help young players on days like Christmas, and Wonder Box will probably be used in a similar fashion. While you won't always get something cool with it, you may be able to get some really great Pokémon via the Wonder Box.