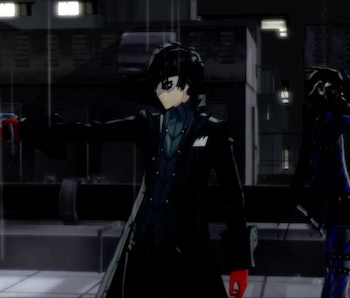 Catherine: Full Body was dynamite when it released earlier this year for Switch with just a few additions to the original story, and based on a recent Persona 5 Royal data-mine, developer Atlus might be trying to recapture the magic with a beefed-up Persona 5 Royal port for the Nintendo Switch. One specific detail from the leak focuses on a crucial scene that would completely change the fate of a controversial fan-favorite character.

Here's everything we know about the data mine and what it means for Persona 5 Royal.

What was in the data mine?

Uncovered by the Twitter user regularpanties and translated by the user Jugglepup is an addition to Persona 5 Royal's true ending that was cut from the final release. In the scene, ace detective Akechi is revealed to have survived the ordeal on Shido's boat that occurred in Persona 5's denouement. We learn this through a man and a woman discussing Akechi's recovery. Akechi allegedly spent his time in a rehab center recovering after Shido's defeat. The man and woman say Akechi was brought there by "some man," who is presumed to be Joker. Akechi himself then interjects, further clarifying that he's leaving the facility to help the man that saved him. Again implied to be Joker.

This is the second deleted scene from Royal that was later uncovered via data-mine. Regularpanties previously discovered an alternate version of Persona 5 Royal's Valentine's day event, where Joker is able to successfully date the entire female cast at the same time.

Due to being cut content, it's debatable if either scene is canon in any regard, but Atlus could be safekeeping both for a potential Nintendo Switch port.

Why does this mean a Switch port is in the works?

The Persona 5 universe debuted on Nintendo Switch earlier this year with Persona 5 Scramble. The game is effectively a sequel to Persona 5 and makes little sense unless you already know the story from the mainline entry. For Persona 5 Royal to be released on Switch at some point in the near future to add clarity makes a lot of sense.

When that port happens, it would also make sense to add a small incentive for both old and new fans to purchase the ported title. When Catherine: Full Body (another Atlus game) debuted on Nintendo Switch in January, it came with three new voice tracks for Catherine and every piece of DLC previously released for the game. These scenes are already in Persona 5 Royal's code, meaning minimal alterations would be needed to integrate them. Just as the Catherine DLC incentivized a second purchase, as would these small additions.

It could be argued that these scenes will remain deleted much like Yosuke's missing romance arc that remained in Persona 4 Golden's code. That wasn't organically added to the game until a fan chose to make that alteration upon the Persona 4 Golden PC release.