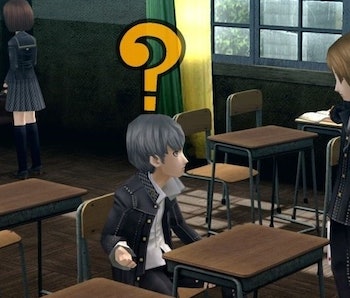 JRPG fans on Nintendo Switch, PS4, and Xbox can experience the classic Persona games, as hot on the heels of Persona 5 Royal Atlus is releasing ports of Persona 3 Portable and Persona 4 Golden. Like the other entries, Persona 4 Golden casts you as a not-so-ordinary high school student, this time solving a deadly murder mystery in the sleepy town of Inaba.

While you investigate the murders and a strange “TV world,” you’ll still need to go about your daily life and school activities. Of course, this entails answering a selection of pop quiz questions, along with specific exams. Acing all of these questions can give you a huge boost to your personal stats, so you’ll want to make sure you get everything right if you’re looking to see and do everything in Persona 4 Golden.

While you could certainly try to answer everything on your own, we have a handy guide with ever quiz and exam question, to make things easier. Keep in mind that some of these questions might take the form of a friend, like Yosuke, asking for help.

Without further ado, let’s make you the pride of Yasogami High School.

Question: What is the year before 1 AD called?

Q: How many parts are there in Murakami’s “The Wind-Up Bird Chronicle?”

Q: What was the first economic bubble incident in the world?

Q: What’s it called when you gain more muscle after getting sore through exercise?

Q: What is the greatest canyon in the solar system?

All May quiz and Exam answers in Persona 4 Golden

Q: Do you know how Soseki Natsume translated the English phrase “I love you” into Japanese?

Q1: What is it called when muscles grow after exercise?

Q2: What is the year before 1 AD called?

Q1: Who said “As soon as laws are necessary for men, they are no longer fit for freedom?

Q2: Which of the following is the highest mountain in the solar system?

Q: Tell me how the theory that the pyramids were built by slaves was disproven.

Q: What sport is “heikin-dai?”

Q: Tell me what kind of exercise builds up lactic acid in the muscles.

Q: Tell me what morale is.

Q: What is identity?

Q: Which one of these is the name of a real river?

All July quiz and exam answers in Persona 4 Golden

Q: Who said this: “Man is but a reed, the most feelbe thing in nature; but is he a thinking reed?”

Q: What is the beginning of “Gakumon no Susume” a reference to?

Q: What is the medical term for brainfreeze?

Q: Which line can a typhoon never cross?

Q: Tell me what makes the king of hearts look different from the other kings in a standard deck of cards?

Q1: Which kanji did Kobo make a mistake on?

Q2: In which period did Japan first implement bonus pay?

Q1: Which king in a deck of cards is missing a mustache?

Q2: Who said this: “Man is but a reed, the most feeble thing in nature; but is he a thinking reed?”

Q1: Which one of these is the name of a real river?

Q2: What is the beginning of “Gakumon no Susume” a reference to?

Q: “Venison” is the meat of what animal?

Q: Which of the following is a kigo for fall?

Q: What do you call somebody who’s between ninety and one hundred years old?

Q: What part of the human body has an apple in it?

All October quiz and exam answers in Persona 4 Golden

Q: Which of these sports also uses an anchor?

Q: Where would you find Japan on a map made in a foreign country?

Q: Tell me what bird's name means “coward in English.

Q: What did Napolean invent?

Q: Do you know what vegetable was used to make the first jack-o-lantern?

Q: What kind of fish was I just talking about?

Q1: What part of the body contains the “Adam’s Apple?”

Q2: Where would you find Japan on a map made in a foreign country?

Q2: “Venison” is the meat of what animal?

Q1: What is the Japanese name for “panda?”

Q2: Which bird is falsely known for being cowardly in the English phrase “to stick one’s head in the sand?”

Q1: What was the name of the Wasan textbook that came out in the Edo period?

Q2: What did Napolean invent?

Q1: Which season is the adjective “brisk” a kigo for?

All November quiz and exam answers in Persona 4 Golden

Q: Tell me what the “figure” in “figure skating” refers to.

Q: Who can tell me what kind of bird a kanko-dori is??

Q: Which country do you think the South Pole belongs to?

Q: What desert is the Welwitschia from?

Q: Alcohol has to do with the roots of the word “bridal.” Do you know how?

Q: There are over 130 ancient pyramids in Egypt, but do you know who’s buried in the biggest one?

Q: Which of these is considered a “rice cake”?

Q1: What does French food stem from?

Q2: What does the “figure” in “figure skating” refer to?

Q1: Who is buried in the biggest pyramid in Egypt?

Q2: What is a book of maps called?

Q1: What word has the words “bride ale” as its roots?

All December quiz and exam answers in Persona 4 Golden

Q1: Which country does the South Pole belong to?

Q1: What desert is the Welwitschia found in?

Q2: Which of these is considered a “rice cake”?

FINALS ARE OVER, ONE EXAM LEFT

Q: Do you know what color a fuzzy-wuzzy polar bear’s fur really is?

Q: What determines whether a hair grows curly or straight?

Q: Do you know the intent behind the phrase, “Compassion is not for the good of others”?

Q: Which Cleopatra is the one who was known as one of the three most beautiful women in the world?

Q: What are you supposed to put on top of a kagami mochi?

Q: “Toso” is a traditional drink for the new year, but what does the name mean?

Q: In the Thai and Vietnamese zodiacs, which animal is used in place of the rabbit?

Q: What color is the snow that falls in Europe in the spring?

Q: What’s the next unit of measurement up from a terabyte?

Q: What color were the pyramids originally?

Q1: The word “alphabet” comes from the words “alpha” and what other one?

Q2: How was the theory that the pyramids were built by slaves disproven?

Q2: What is the medical term for brain freeze?

Q1: What is the Japanese zodiac equivalent to the “cat” in the Thai and Vietnamese zodiacs?

Q2: What vegetable was used to make the first jack-o’-lanterns?

Q1: What color were the pyramids when they were first built?

Q2: What gets mixed with snow in Europe that sometimes causes it to turn red?

Persona 4 Golden is out now for PS4, Xbox One, Xbox Series X|S, PC, and Nintendo Switch.

This article was originally published on Jan. 4, 2023