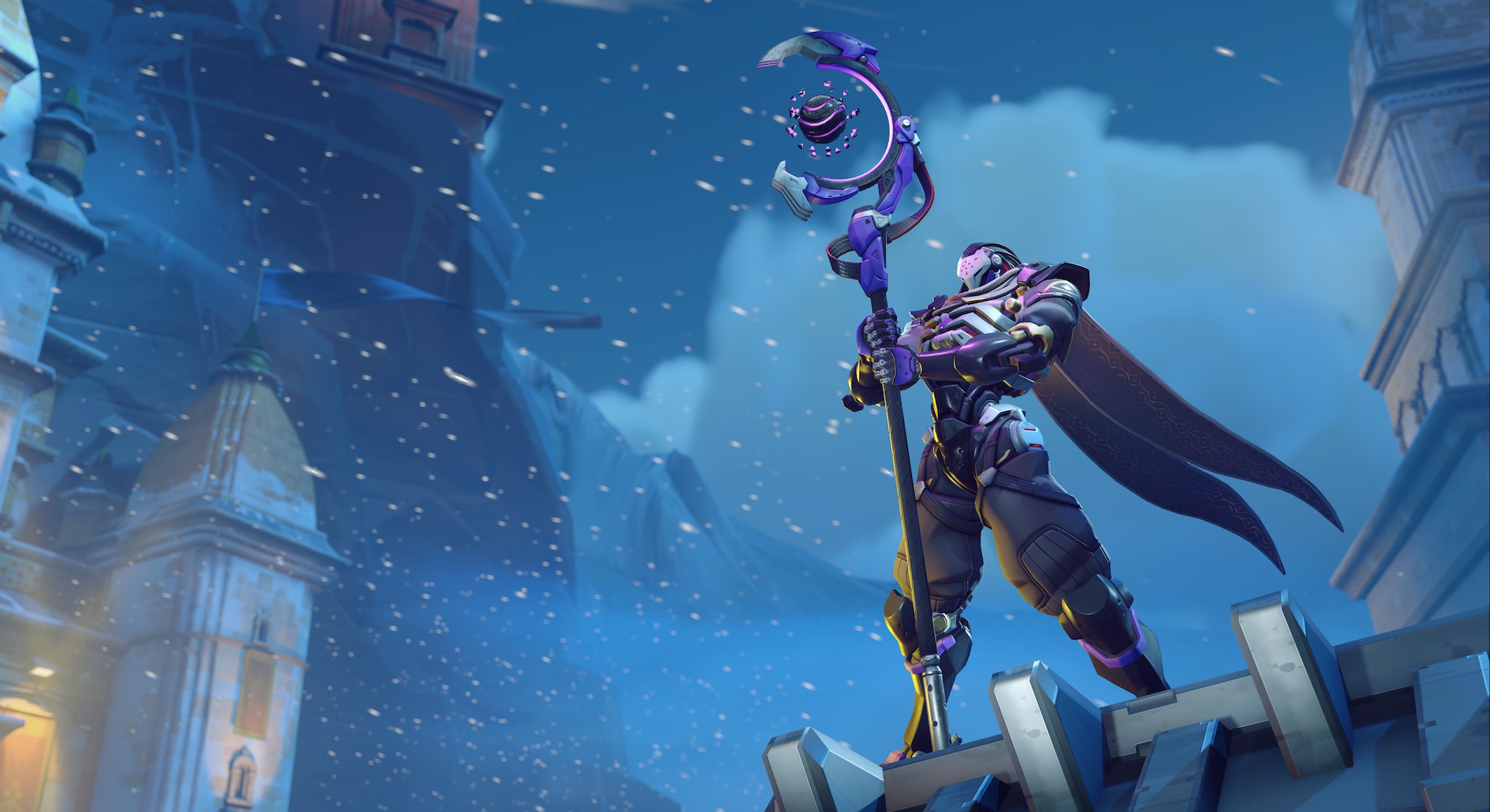 The greatest strength of Overwatch has always been its intricate and rewarding lore.

Easter eggs adorn the walls of its multiplayer maps and in snippets of character dialogue.

While each of its new playable heroes comes with an intricate backstory, few feel as central to the big picture as Ramattra, the new robot tank introduced in Overwatch 2 Season 2. Once a peaceful monk, he’s ready to take a stand against the evils of humanity.

“Ramattra’s people are dying,” Overwatch 2 Lead Narrative Designer Gavin Jurgens-Fyhrie tells Inverse of the game’s newest hero. “When they die, they can't be restored from a backup, so every single Omnic is an incalculable loss.”

“Incalculable loss” is a phrase that sticks with me long after my conversation with Jurgens-Fyhrie and Art Director Dion Rogers about Ramattra, who’s at the center of a decades-old conflict between man and machine.

“That's why we see this rage in Ramattra,” Jurgens-Fyhrie says. “He went from an intellectual trying to urge peace to absolute rage. He's done talking. That's where we see him get his scariest.” A brilliant robot created for war during the Omnic Crisis (a conflict decades ago between man and machine), Ramattra spent years at the Shambali monastery in Nepal, India striving for peace and teaching his fellow Omnics how to defend themselves. But racist violence persisted. The sniper Widowmaker assassinated the Shambali leader Mondatta in one of the game’s earliest cinematics. His death, like so many others, was indeed an incalculable loss.

These synthetic lifeforms occupy a special place in the world of Overwatch, with their sentience viewed by many as a miracle. They can’t store their data on a thumb drive, and they can’t procreate or build more. Does that mean an Omnic life is worth more than a human life? Some would say yes.

Decades prior to the game’s present-day, automated robotics factories called Omniums created the first Omnics as essentially robotic slaves. Anybody familiar with stories like Terminator, The Matrix, or even Nier: Automata can predict what happened next: Robots became fully sentient, recognized the evils of mankind, and promptly began destroying their creators. AI god programs took control of the Omniums and of the Omnics, and thus began the Omnic Crisis.

Ramattra’s Origin Story is a sad one.

R-7000s like Ramattra, also known as Ravagers, were built to lead the robotic forces during this era. The titular “Overwatch” team comprised of experts, warriors, and pseudo-superheroes was formed as a successful countermeasure. Most Omniums were destroyed or deconstructed and the god programs shut down, which is why no more can be created.

Most humans, even today, have nothing but fear and hatred for their robotic counterparts.

“This very intelligent Omnic made for war, what happened to him when he was forced to confront his own actions during the Omnic Crisis?” Jurgens-Fyhrie says. “It shook him to his core and took him into the mountains of Nepal to the Shambali temple where he was trying to find his place in the world.”

“Every single Omnic is an incalculable loss.”

The temple — which is the location of the game’s new map — was founded pre-Crisis by the very first sentient Omnic named Aurora, who sought peace, understanding, and enlightement. Countless Omnics, Ramattra included, embarked on a pilgrimage there seeking the same, and he even brought Overwatch’s beloved Omnic healer Zenyatta there as well, teaching all of his brethren, including Zen, how to fight. If Ramattra’s “Pummel” move looks familiar as he punches rhythmic fashion, it’s because the design and animation teams referenced Zenyatta’s animations as he hurls out his Orbs of Destruction. Overwatch’s greatest strength is in design details like this, little Easter eggs that contextualize the world.

“We definitely look at the two and try create connections through animation, through design, all kinds of things,” Rogers tells Inverse. By all accounts, Ramattra and Zenyatta are as close as “brothers,” even if they’ve become distant in recent years.

“They’ve spent a lot of time talking,” Jurgens-Fyhrie says, “and they both feel very similarly about the danger of being too passive in the face of what humans have done to their people.”

Zenyatta is not above violence, but peace and healing are his priorities. Ramattra, on the other hand, has seen a lot more death and destruction. His frustration and rage culminated in him founding Null Sector, the pro-Omnic terrorist group that’s one of Overwatch 2’s primary antagonists.

“He’s not talking about gathering up all the Omnics in the world and leading them against the humans,” Jurgens-Fyhrie says. “He's building an army of dumb machines. He will not put a single other Omnic at risk besides himself.” Overwatch 2 heroes like Ramattra, Zenyatta, Echo, Orisa, and Bastian are robots who can think, feel, and speak. But the Null Sector robots in PvE events are mere “dumb machines” Ramattra created using a repaired Omnium.

Ramattra is many things, including a brilliant inventor. Sometime after founding Null Sector, he modified his own body with an extra pair of hulk-sized arms to help him defend allies and punish enemies.

“Ramattra’s story helped us with his visual design,” Rogers says. “His Omnic monk form is more neutral, calm, and even defensive. But then there’s this rage in his narrative, so when thinking about visually showcasing his personality through his abilities and art design, that’s where the Nemesis form comes from. It’s an alternate depiction of his personality manifested in a visual way.”

Narratively, Overwatch 2 is building towards something big, with Ramattra playing a major role.

“Both Ramattra and Shambala do represent a step forward in the lore and some things that we're beginning to do with the game,” Rogers says. “We’re beginning to answer some of those big questions.”

When asked what sort of prominence Ramattra might have in the upcoming Overwatch 2 story campaign, Rogers and Jurgens-Fyhrie declined to answer. But it’s abundantly clear: Another crisis is coming, and Ramattra is the catalyst.