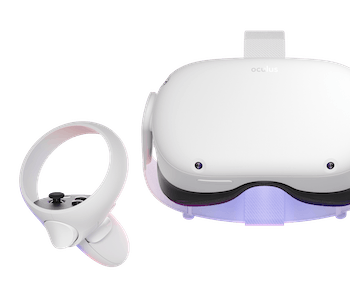 One thing is for sure about Facebook's latest VR headset, the Oculus Quest 2: It is an astounding achievement in virtual reality. But it might attain an even bigger goal. It makes VR more than just a plaything of the rich and bored.

The Quest 2 is an improvement compared to Oculus Quest in both cost and convenience. It's cheaper than most comparable headsets, and while it's wireless like its predecessor, this one's lighter and more comfortable.

At the $299 price tag, you're probably better off investing in a Nintendo Switch or Xbox Series S if you want access to a wider, more consistent library of entertainment.

For VR enthusiasts though, the Oculus Quest 2 is full of wondrous treasures. And at a time when everyone should refrain from traveling on vacations, spending $299 on a VR headset feels like a very affordable alternative.

What's great about the Oculus Quest 2

If you can't go to Star Wars: Galaxy's Edge in a Disney theme park, you might as well experience it in VR. The Oculus-exclusive Star Wars: Tales from the Galaxy’s Edge is a big draw for any Star Wars fan, and even if the game clocks in at a too-short four hours, that's still four stunning hours spent in a galaxy far, far away. And there are plenty of other gems as well, including another excellent Star Wars game: Vader Immortal.

The Under Presents is a Sleep No More-style immersive theater VR dreamscape where real performers interact with participants in bizarre ways. And when performances aren't happening, it's structured as a more freeform multiplayer experience. There's also FitXR Dance, a fitness-focused rhythm game worth considering as part of your home workout regimen — and a whole lot more.

Oculus Quest 2 visuals look better than just about any other VR rig. Picture quality just keeps getting better, and this is the best around right now for this price, especially when you remember that this rig is totally wireless.

Unlike with more clunky wired headsets, setting up the Oculus Quest 2 is an easy, streamlined process. You just shove it on your head, download an app to your phone, log into everything, and you're immediately thrust into fairly stunning VR vistas. What's not to love?

What's not so great about the Oculus Quest 2

For all the strengths of the Oculus Quest 2, including its lower price tag compared to other headsets, $299 is still a lot of money that could be spent elsewhere.

Star Wars in VR is cool, but Nintendo's astonishingly good lineup of first-party games on the Switch, also $299, is even cooler. So is the brand-new Xbox Series S, Microsoft's next-gen, all-digital console. For $14.99 a month, it can access over 100 top-notch games via Xbox Game Pass.

To tap the Oculus Quest 2's full potential, you'll want to invest in a $79 Oculus Link cable, a 15-foot wire that connects to a gaming PC to access a more robust library of VR titles that includes Half-Life: Alyx. Why doesn't the headset just come with the wire? It feels like a not-so-cheap excuse to keep the initial price low.

Perhaps the most glaring issue here, however, is that as of October, all new Oculus users have to register with a Facebook account. Those, in turn, require that you use a full name. More plainly, there's no sense of anonymity here. Facebook tracks all user information and activity across various platforms, including this one, "to show you personalized content." It's all a bit Big Brother, but at least it's a great VR headset.

Skip your family vacation and instead go all-in on VR with the Oculus Quest 2 leading the charge. While it's intimidating to take that first step, the game-changing potential here is worth it.

More like this
Gear
Oct. 1, 2022
Everything you need to know about Meta’s Quest 3
By Jackson Chen
Gaming
Sep. 21, 2022
15 years ago, one sci-fi game changed everything — now, it's getting an upgrade
By Robin Bea
Gear
Sep. 29, 2022
Meta’s Quest Pro headset may actually make mixed reality mainstream
By James Pero
Related Tags
Share: