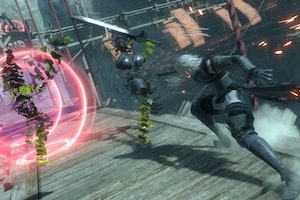 'Nier Replicant' weapon list: How to get all 33 to unlock secret endings

Not only does the title itself expect a lot from players, but it’ll take a bit of patience and commitment to get the full experience. Case in point, getting all five endings requires playing through the game multiple times.

On top of that, you’ll need to unlock every single weapon to get endings C through E. Miss one and you’ll have to load back in and hunt around for it. The game doesn’t tell you how to get all 33 weapons, so that can be a frustrating endeavor. If you don’t want to do the guesswork, here’s a guide on how to grab every weapon in the game via the main story, sub-quests, and shops.

There are certain weapons you can’t miss, as multiple will be rewarded through the regular story. You’ll only have to worry about getting around 27 weapons by other means. On top of that, there are a few weapons that you can pick up during the story in specific locations. For the sake of simplicity, here are all the optional ones that you could accidentally miss.

First half of the game

Second half of the game

There’s one weapon of note here. The Iron Pipe can be obtained through a specific sub-quest, but you’ll also get it for completing Ending B naturally. If you want to save time and skip a quest, you don’t have to worry about that one either. So in total, expect to get seven of the weapons you need by the end of the route towards Ending B.

Certain weapons can only be bought at item shops. These can be pretty expensive, but side-quests reward quite a bit of cash are available in the game’s second half. You’ll need to grind out a few missions to get everything, so make sure you’re taking on some extra tasks.

Here’s the full list of weapons available through shops as well as how much they’ll cost.

First half of the game

Second half of the game

Certain weapons can only be obtained through specific sub-quests or side content. While you’ll need to grind out a few extra quests to get enough gold, you’ll need to make sure you do this handful of missions in the second half of the game.

Once you have every single weapon and have gotten Ending B, you’ll be able to get Endings C through E. Make sure you collect them all before going into the Shadowlord’s Castle on your third playthrough.