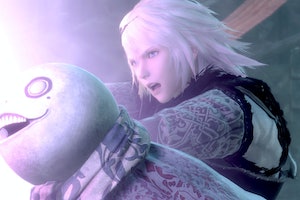 'NieR Replicant' endings guide: How to unlock all 5 versions

While players can “beat” it in around 20 hours, that’s far from the actual ending. Like NieR:Automata, the game needs to be played multiple times to get the full story. Players will need to spend another 15 hours playing after the credits roll to get the true ending.

Getting each ending isn’t quite as simple as replaying the game, though. Each one has a different requirement and they can get pretty obtuse (thanks, Yoko Taro). If you want to unlock all five endings, here’s exactly what you’ll need to do.

Note that we’re going to keep this spoiler-free, so we won’t be saying what happens in each ending. If you want to be completely surprised, however, proceed with caution.

How to get NieR Replicant Ending A

This one is easy enough. All you need to do is complete the game for the first time. While this will wrap up the main story, it’s far from the real “ending.” The additional playthroughs don’t just tag an alternate scene on the end. They further develop characters and add new scenes that entirely change the context of the game. Consider Ending A only Act 1 in a three-part play.

How to get NieR Replicant Ending B

Once you clear the game, load up your clear data to restart the game. Luckily, you don’t have to play the full 20-hour game again. Instead, it starts you partway through the game’s second half. That means you’ll only have to replay around five hours of the game. This path features entirely new cutscenes, so be careful not to skip anything you haven’t seen yet. You really don’t want to miss the new information.

How to get NieR Replicant Ending C

Here’s where things get obtuse and a bit spoilery.

To get Ending C, you’ll need to acquire every single weapon in the game. There are 33 weapons in total, which are obtained through the story, in stores, and through select sub-quests. Make sure to nab every single one before you enter the final area.

Like Ending B, you’ll play the same chunk of the game’s second half again. Skip all the cutscenes and side-quests, and you should be able to blaze through this in a few hours.

If you get to the end with every weapon, you’ll get an additional boss fight and a final choice. This part is extremely important: You need to choose the “kill” option here. You’ll understand why when we talk Ending D, but don’t misclick here or you’ll be very frustrated later.

Also imperative here: When the game asks you to save your clear data, save it in a new spot.

How to get NieR Replicant Ending D

Instead of loading your clear data, reload the first file (assuming you saved before the final area). Rather than playing the same few hours again, you’ll only need to go through the final section and boss fights.

This time, select the “Sacrifice” option. The game will warn you several times that doing so will wipe your save data entirely. It is not kidding. Commit to it and everything you’ve done will vanish before your very eyes. That’s why you need to complete Ending C first or risk missing it entirely. You’ll get Ending D for your trouble.

How to get NieR Replicant Ending E

Now here’s where it gets really fun. The original NieR ends there, but Replicant actually adds one more secret ending that you can’t miss. To get this, start a new file. When it asks you to enter a name, you need to type in a name that’s different from your original file.

You’ll start the game from the beginning and everything will seem pretty normal ... that is, until you get to the big boss fight in the Aerie. I won’t say anything else here, but you’re certainly in for a treat.