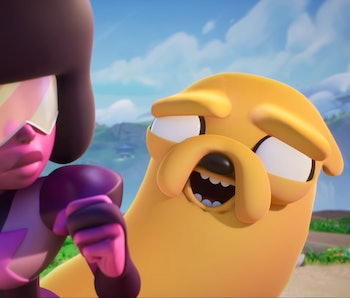 MultiVersus just reignited the debate about free-to-play microtransactions with its open beta. The Warner Bros. Smash clone was going to start conversation either way with how social media is plugging it. However, after those who previewed the game were pleasantly surprised, platform-fighting fans started to pay attention. They had hope after hearing about Player First Games’ dedication to making it a free-to-play fighter with crossplay and rollback netcode that was actually good. Unfortunately, some of the goodwill faded after hearing about the paywalled content.

Warner Bros. revealed a catch: Cosmetics could make MultiVersus feel like it’s a paid experience, even if it isn’t. MultiVersus features two kinds of currency: coins that you can earn in the game and Gleamium, which you have to buy. Unfortunately, many cosmetics can only be unlocked with Gleamium. As per VGC, which received early access to the game, the total reaches $255 for all paywalled content. This number doesn’t include characters, since you can technically unlock them for free if you play the game enough instead of using Gleamium.

Warner Bros. won’t make you pay for the DLC. However, players argue that it elbows players into purchasing content with most of the cosmetics locked behind a paywall. It might not explicitly ask players to pay up, but it leaves a bad taste in beta testers’ mouths.

Gamers always complain about Nintendo charging up the butt for its DLC. It has some right to, though. It’s Nintendo, a too-big-to-fail video game publisher and developer that’s ingrained itself into our lives since childhood. However, MultiVersus is the first of its kind. It’s a free-to-play platform fighter developed by a relatively unknown studio with Warner Bros. backing. It’s also more expensive than the average fighting game, in terms of the base price plus DLC.

Here’s a list of just a few fighting games (platform fighter or not) and the price for the full game along with its DLC and cosmetics:

MultiVersus is free to play, so it makes sense that WB would need some way to generate revenue. As VGC mentioned, the characters and even some of the skins can be unlocked for free as you play. However, the fact that the starting line to unlock all its content so far is at $255 can seem daunting, especially since its going to add even more content in the future.

The MultiVersus open beta is currently in early access. It will support PC, PlayStation 4, PlayStation 5, Xbox One, Xbox Series X|S, and Nintendo Switch.