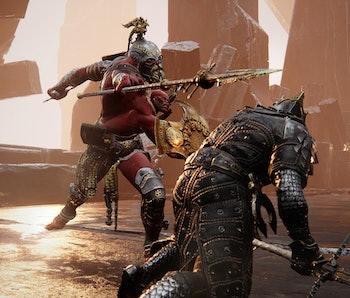 Mortal Shell, the dark fantasy RPG that generated loads of buzz and favorable Dark Souls comparisons, will come to PC and consoles sooner than its previous "late 2020" release window led us to expect. Mortal Shell will be available on PS4, Xbox One, and PC (as an Epic Games Store timed exclusive) on August 18. That's a welcome new addition to what's shaping up to be a pretty lean August in terms of major releases, as we head into the final few months before the launches of PlayStation 5 and Xbox Series X.

As we head into the closing weeks of Summer Games Fest, Not-E3 2020, Summer of Games, or whatever you want to call it, fans of intensely challenging fantasy games had little to sink their teeth into. While Ghost of Tsushima dazzled with fantastic environments and remarkably precise swordplay, it doesn't have that bone-chilling creep factor. There's also been nary a peep about Elden Ring, the much frothed-over collaboration between Japanese developer FromSoftware and perennially tardy Game of Thrones creator George R.R. Martin.

Developed by Cold Symmetry, a new small studio comprised of AAA veterans, Mortal Shell takes players to a shattered, terrifying world where you'll need razor-sharp precision and instincts to uncover hidden sanctums and whittle down formidable enemies. Mortal Shell will be priced at $29.99 for PS4, Xbox One, and PC. If you're hoping to play on Steam, you'll have to wait until a yet-to-be-announced date in 2021.

Here's the latest trailer for Mortal Shell, which reveals the game's wild ranged weapon. You'd be forgiven for thinking that it's a steampunk railgun, but it's actually called the Ballistazooka. Yep, that means it's a handheld, run-and-gun ballista, capable of pinning your opponents onto nearby structures.

The trailer provides a glimpse at more of the game’s atmospheric environments and intimidating baddies. It's also our first close look at the game's mysterious fourth Shell, Solomon.

"Launching Mortal Shell worldwide is a dream come true,” said Cold Symmetry co-founders Andrew McLennan-Murray, Anton Gonzalez, Dmitry Parkin, and Vitaly Bulgarov in a press release accompanying the announcement. “Our commitment to our fans is to create a soulslike game that is authentic, uncompromising, and unrelenting. We were humbled by the popularity of the beta and we closely studied the feedback we received to create something that we are incredibly proud of.”

Mortal Shell comes to PC, PS4, and Xbox One August 18.

More like this
Gaming
6.21.2022 4:27 PM
Everything you need to know about Crisis Core: Final Fantasy VII Reunion
By Hayes Madsen
Gaming
6.15.2022 6:54 PM
Every last gruesome detail we know about Diablo 4
By Joseph Yaden, Mike Bloom and Robin Bea
Gaming
6.17.2022 4:00 PM
The agony and ecstasy of PlayStation trophy hunting: "It's a huge drop of serotonin”
By Joseph Yaden
Related Tags
Share: