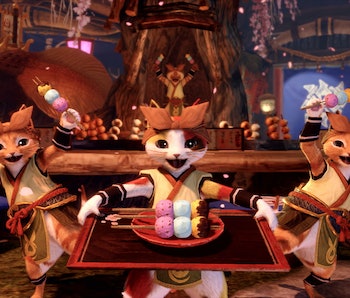 Monster Hunter Rise has already made a splash on Nintendo Switch, with streamlined quality-of-life features that make getting into the action easy-breezy compared to previous installments of the series. For the time being, Xbox and PlayStation console owners have been relegated to the sidelines of the sword-swinging action, as the game’s only available on Nintendo Switch.

Will Monster Hunter Rise ever come to Sony and Microsoft consoles? While it seems all but inevitable, at this point Capcom has yet to make any official announcements. However, Capcom has already revealed a release window for the PC version of the game. Here’s everything we know at this stage about Monster Hunter Rise on platforms beyond the Switch.

When will the Monster Hunter Rise PC port be out?

While we don’t have a firm release timeframe just yet, series producer Ryozo Tsujimoto told GamesRadar “we've decided to move forward with a PC version as well,” which is currently slated for release in early 2022. Tsujimoto also added that the PC release was prompted by feedback from fans.

Will Monster Hunter Rise come to PS5 and Xbox?

Capcom has not announced plans to bring Monster Hunter Rise to PS5 or Series X at this time. But given the team’s willingness to bring the game to PC, it could happen eventually — if demand is there.

Rise was tailor-made to the Switch, with mechanics like fast travel and the wirebug lending the game more of a pick-up-and-play quality than its immediate predecessor. That’s led some outlets to speculate the game will never be ported to PlayStation or Xbox.

However, 2018’s Monster Hunter World has sold more than 16 million copies across Xbox, PS4, and PC, so there’s clearly an audience for the series there. Even if it takes a little longer than fans might like, we’d be surprised if Rise never makes it to other consoles. That said, World was never ported to Switch, though that may be a matter of hardware incompatibility more than anything else. It may be that Capcom’s plan has always been to keep Switch iterations of the series separate, but those sales numbers certainly make ports an enticing prospect.

The PC version will likely boast upgraded visuals, which will likely make it better suited to a port to Microsoft and Sony’s next-gen consoles. However, given the current timeline for the PC release, we wouldn’t expect to see Rise on other consoles until mid- or even late 2022, if it happens at all.

What new additions can we expect from Monster Hunter Rise ports?

Capcom has already revealed an extensive roadmap for Monster Hunter Rise, with the version 2.0 update due out in late April. This update will add new monsters to the game, and remove the level cap on Hunter Rank, which maxes out at seven in the current version of the game. Version 3.0, which is planned for later this year, will introduce even more new monsters to Rise, and will also add a new ending to the game. It’s unclear at this stage if Capcom plans updates beyond 3.0, or if there will be a large-scale expansion similar to Monster Hunter World: Iceborne in 2020.

At any rate, given the current timeframe of Capcom’s roadmap, it’s likely that the PC version will include version 2.0 and 3.0 content. It stands to reason, then, that any possible Xbox and PlayStation ports next year would also include this content.