"It's important that we stay open to new ideas of how to introduce more people to PlayStation." 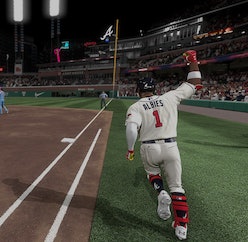 MLB The Show 21's announcement confirmed one major change: While this reveal hit the standard bullet points like the cover star and release date, there's something special about this year's baseball game. MLB The Show 21 is also coming to Xbox even though it's developed by PlayStation's San Diego Studio.

That's right, MLB The Show 21 will be available on Xbox One and Xbox Series X in addition to PlayStation 4 and PlayStation 5. This is an exciting move for PlayStation, which typically doesn't support multiplatform releases. It could show that they've learned from the success that Microsoft has had with games like Minecraft and Ori and the Blind Forest by letting it be released on other platforms.

On Monday, PlayStation Studios unveiled MLB The Show 21 while confirming the Xbox release that San Diego Padres shortstop Fernando Tatis Jr. was the cover star. The game comes out on April 20 and will be on Xbox consoles on day one. It features cross-play so you can play with friends and other platforms and even cross-progression.

The only catch is that players won't be able to upgrade the PS4 or Xbox One version of the game to the next-gen version. Still, these kinds of multiplatform releases are expected from Microsoft but not Sony. MLB The Show 21 indicates that will start to change.

This could be the start of an exciting new era for PlayStation where they actually learned something valuable from Xbox. All PlayStation Studios titles don't to be exclusive and restricted to just PlayStation consoles, and the success of MLB The Show 21 could really demonstrate that to Sony.

This multiplatform release was actually teased all the way back in December 2019. When MLB and the MLBPA renewed their partnership with Sony for the MLB The Show franchise, it came with confirmation that the baseball game would come to "additional console platforms beyond PlayStation platforms as early as 2021."

The announcement was retweeted by both Microsoft and Nintendo, though MLB The Show 21 isn't coming to Nintendo Switch. In order to keep the licenses, it appears that Sony had to give up exclusivity. That must have not been an easy choice for a console manufacturer that's typically hesitant to go multiplatform and play with others, but in the end, they made the right decision.

Over the last year, it's become clear that Sony is becoming more open to the idea of going multiplatform like Microsoft. Horizon Zero Dawn came to PC in August 2020, and now MLB The Show will be on Xbox as well. If this proves to be a successful move for both franchises, then could we possibly see more PlayStation games make the jump to other platforms?

Last year in a PlayStation Blog interview, Sony Interactive Entertainment's Head of Worldwide Studios Hermen Hulst was hesitant to commit entirely to a day-one multiplatform approach for Sony. Still, Hulst admitted that "it’s important that we stay open to new ideas of how to introduce more people to PlayStation, and show people maybe what they’ve been missing out on."

As sports video games are fairly casual and ubiquitous, it makes sense that MLB The Show would be the first franchise Sony fully embraces an Xbox release with. The responses are mixed. While most are fine with more people being able to experience great games, some die-hard Sony fans can't stand the thought of PlayStation being on other platforms.

While it's okay to keep some heavy hitters like Halo Infinite or God of War: Ragnarok as exclusive, it's better for the industry if PlayStation and Microsoft work with each other and get the right games to players on other platforms.