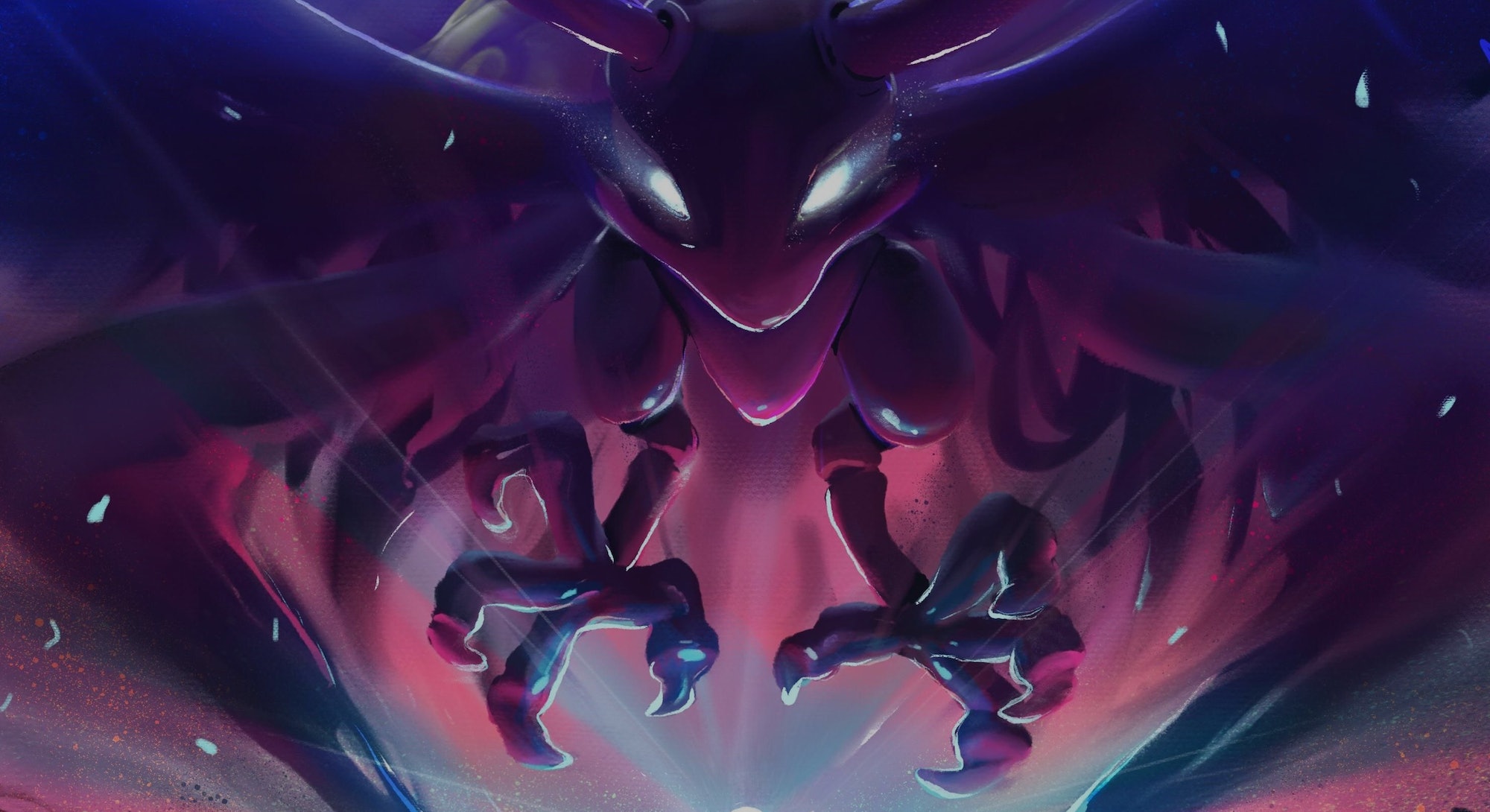 Ori and the Will of the Wisps is nothing short of an enchanting escape from reality.

Developer Moon Studios introduced its whimsical world to gamers back in 2015 with the release of Ori and the Blind Forest and its 2020 sequel, Ori and the Will of the Wisps took every last detail of the first installment and expanded it into an unforgettable open-world platformer, which has now been brought to Nintendo Switch by iam8bit.

Playing the series on PC, Xbox One, or Nintendo Switch is a full-body experience that ebbs and flows from a kinetic sea of explosive slugs to a serene swim through the Luma Pools. The game's tidal pacing was meticulously crafted by Moon's programmers, illustrators, and musicians. Inverse spoke to series lead artists Daniel van Leeuwen and Jeremy Gritton and lead composer Gareth Coker about bringing the truly unique aesthetic experience of Ori to life.

What moment in the Ori series best showcases the interplay of visuals and music?

Coker: The Mouldwood Depths from Will of the Wisps was the first time we experimented with lack of light in the gameplay. I needed the melody of the monster to make it feel like there’s something constantly stalking you, so I had 50 string players of an orchestra play the same thing slightly differently to create an unnerving and unsettling feeling.

You get the creepy Mouldwood music all the way until you meet the spider boss, Mora. That same melody plays in an epic form because you're fighting. That's a philosophy that goes across the entire game — almost all of the environments have at least two musical loops — it's usually the "before you did the thing" loop and the "after you did the thing" loop, which allowed me to differentiate the tone of changing levels.

Gritton: The prologue’s flight sequence, combines visuals and music in a joyful and celebratory way. That sequence works well together while also telling a story — going from anticipation, to wonder, excitement, overconfidence, and ultimately danger.

Van Leeuwen: The boss fight and escape with Mora is a good example of everything coming together into one spectacle, it really showcases the integration of big 3D models in a 2D environment and it has epic music from Garth Coker hyping you up during the fight. A lot of that environment is very dynamic as well.

Did you use any unusual methods or items to create Ori’s aesthetics?

Coker: In the Kwolok's Hollow ambient track, you'll hear these cool little tick-tock sounds. They're actually just sculpted wooden blocks called frog guiros. You drag [a stick] across the ridges in the frog's back.

If you listen to the track, you'll hear three frog guiros at different pitches that I added an echo to. It’s not a big part of the track, but for me it was a silly little thing with a distinct sound. It’s the only time in the game where you hear it, so it’s going to stand out.

Gritton: Throughout production, I used software that would flip my monitor’s visuals to grayscale. I would lean on this to double check the values in our scenes. Color can sometimes fool you into believing there is more value separation than there really is. I'd also flip a cinematic or trailer on the x-axis and watch it that way. Watching the video flipped gives your brain a fresh perspective on it and helps you notice flaws, which is helpful if you’ve already watched something 100+ times.

Van Leeuwen: For the 3D characters we used a lot of unusual techniques to make them blend in. We hand shaped a lot of the normal information on meshes and our lighting system is very different from something you’d typically see. Much of the dynamic light in the game is based on hand-painted maps. We painted close to 30,000 of them!

The look and sound of a frog guiro.

What experience from your time working on Ori stands out most?

Coker: One thing I'm proud of in the ending is how the music for the entire final encounter, which is split into multiple phases, all transitions seamlessly. We also managed to play every key melody from Blind Forest and Will of the Wisps. That stood out to me because it takes a lot of programming and planning on the arts and animation side.

Gritton: In our software, we have a series of screenshots for each scene that are all connected, and they show the layout of the world. After years of planning and discussions, I remember opening the editor and zooming out to look at the entirety of Niwen we had built. It was a really cool moment. I’d never seen everything put together until that day. It was exciting to suddenly take a step back and think, “Wow, it’s all coming together!”

Van Leeuwen: The biggest moment was the first E3 where we teased the game. The team was still small and we worked very hard to present something we’d all be proud of. It laid out our targets for what we wanted to achieve visually, and all the reactions to the teaser excited everyone on the team. It’s heartwarming to see people react so emotionally to something you created.

What other mediums do you think Ori's story could work in?

Coker: Ori would definitely translate well into animation. I mean, if we can get Minecraft Steve into Smash then anything can happen! It feels like the walls between platforms are coming down. We're going to see a lot of cross-media stuff. The audience that's watching TV now grew up playing games. They might not have time to play games anymore, but they can still enjoy the game experience through television.

Gritton: Ori could work very well in animation, because although the gameplay portion would be missing, many other elements — visuals, music, story — would transfer over. You’d still be able to craft the experience in a similar way. It could also do well in a graphic novel or comic book, although that would be a bigger adjustment. There would certainly be a give and take, but there’s a lot to pull from if it were to happen.

Van Leeuwen: I would love to see Ori on the big screen, just to make sure that the soul Ori stays intact. Many movie adaptations of games seem to have a hard time connecting with the original fans. Ori could work if they [movie creatives] are willing to take some risks.

Did you dream about Ori during your time on the project?

Coker: No Ori dreams, but being allowed to write music in this world is a form of escapism for me anyway.

One of the things that was taught to me very early on is that film and game music doesn't just communicate what's on screen, it communicates what's not on screen. So what's Ori's state of mind when he's in the Luma Pools? That's why I was convinced that the approach I took for that section would work.

Gritton: I did! Most of the time it involved more mundane things, like working with our bug tracking software, or manipulating our user interface. One time I was on a long international flight home, and had an extended half-awake dream about Ori. Several story ideas came from that. Our Creative Director, Thomas Mahler, joked that I should fly more often. We did end up using some of them, but I can’t remember which.

Van Leeuwen: I always have a hard time remembering what I dreamt about, but I definitely pondered about Ori a lot before falling asleep.

What's something you're really proud of that a casual player may not have noticed?

Coker: I don't think you could put the Ori soundtrack in another game, because the melodies, the sounds, and the production aesthetic is so tied to Ori that it would feel wrong anywhere else.

Gritton: Most people that play the game can empathize with Shriek, but might not pick up on the mirroring she has with Ku. Both were orphans, and were damaged while still in their respective eggs. Ku was damaged by the light, and Shriek by the absence of light. Ku was accepted into a loving family that supported her and encouraged her, in spite of the fact that they were all different. Shriek was viewed as a monster and rejected by everyone - including her own kind. Part of the story is a commentary on how our circumstances can shape who we are.

Van Leeuwen: The spirit trees that give you abilities are all the same shape in Blind Forest, but for Will of the Wisps we took the time to make all of them unique — the shape of the tree represents the ability they give you.

Ori and the Will of the Wisps is out now for Xbox One, PC, and Nintendo Switch.