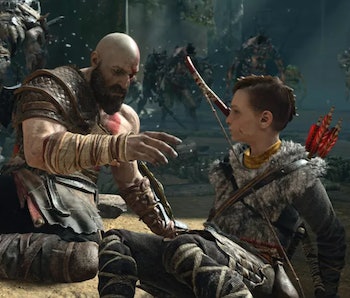 Red Dead Redemption 2 and God of War could cross over in a way that you wouldn't expect. Two of the best games of 2018 could gain a deeper connection as an Instagram Post suggests that Arthur Morgan's actor, Roger Clark, could be in the upcoming PS5 exclusive God of War: Ragnarok. But if Clark is in the new God of War game, who would he play?

Earlier this month, Roger Clark posted a now-removed Instagram story. As documented by @GermanStrands on Twitter, it featured an ad for jobs at Sony Santa Monica. This is the development team behind 2018's God of War and its sequel, and the job ad prominently features Kratos, Freya, and Atreus.

While there has been no official announcement about his involvement, the fact that Clark signal-boosted this job on his Instagram has caused fans to believe that he could show up in God of War: Ragnarok later this year.

Sony Interactive Entertainment has been super secretive about God of War: Ragnarok since its announcement in September 2020. While the game's cast of characters will certainly expand as the Norse gods face a cataclysmic event in the next game, we don't know who any of these gods or new characters will be voiced by.

Even though the timing lines up well for Roger Clark to be in the God of War sequel, it's also possible that this is a false alarm and he was simply promoting the roles as a fan and member of the video games industry. Still, if Sony Santa Monica and Roger Clark are collaborating on God of War: Ragnarok, there are some exciting opportunities there.

Who could Roger Clark play in God of War: Ragnarok?

As the Instagram story is all we have to go on, there's no official confirmation of if Roger Clark will be in God of War: Ragnarok or who he would play. That said, Inverse has a couple of cool ideas. The most obvious role that we would like to see Roger Clark take on is Thor. This character first appeared in the final scene of 2018's God of War, all but confirming that he'll be one of the main antagonists of God of War: Ragnarok.

A gruff but somewhat honorable god would be a fitting role for Clark, who was about to make Arthur Morgan a tough but likable character. With Arthur Morgan, Clark also proved that he was willing to go through the intense motion-capture process required for a major character in a AAA game. If Thor is one of God of War: Ragnarok's main antagonists, then Roger Clark would be a talented, experienced fit.

If they want Clark to go even more grandiose, we could see him taking on the role of Odin. Whoever portrays that role will need a powerful and deep voice to rival Christopher Judge's Kratos, and Roger Clark could match that. Whoever he ends up playing, we can only hope that the performances are as fantastic and memorable as they were in 2018's God of War.