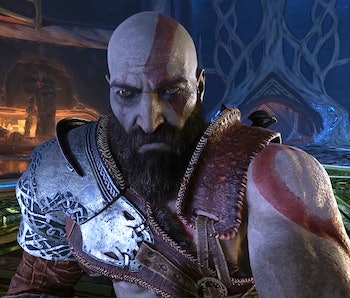 God of War features gripping third-person, over-the-shoulder action that's more satisfying than many of its peers. Throwing Kratos' ax, summoning it back, and working with Atreus as he peppers enemies with arrows keeps combat fresh. The third-person perspective was also used well in God of War's cutscenes, which have excellent cinematography; in fact, the whole game is technically just one continuous shot if you never die.

While God of War works well in third-person, a new concept video shows what the game would be like if it played out from a third-person perspective. After seeing it in action, one can't help but wonder how interesting a first-person mode could be in God of War: Ragnarok.

The video was posted to YouTube on December 29 by Speclizer and has already amassed almost 135,000 views. It showcases many of God of War's iconic story moments, including that breathtaking twist ending, but from a new perspective. We see how these events play out from the eyes of Kratos, Atreus, and even Mimir.

Even though it's just a modded version of the actual game, the perspective switch was pulled off well. Watch it out for yourself below:

The potential for a first-person God of War game seems genuinely intriguing. The fantastic graphics and intricate facial animation work in first-person as well, so many of the emotional moments showcased hit just as hard as they did in third-person. If done well, God of War: Ragnarok's story could be just as effective in third-person.

While the game is likely to just repeat the same camera style as the original, this video shows that Sony Santa Monica should consider a first-person mode for God of War: Ragnarok or a future VR spin-off.

Of course, the one major thing this video doesn't show is how combat would work in first-person. While the God of War games tell compelling stories, the visceral combat is just as much of a part of the experience. If a first-person mode were to be implemented into God of War: Ragnarok, Sony Santa Monica would need to find a way to make combat more palatable.

Even from a third-person perspective, some of God of War's later fights can become quite overwhelming as enemies learn to fly and get smarter about surrounding Kratos and Atreus. God of War: Ragnarok already needs to find a way to solve that issue by making it easier for Kratos to turn and fight enemies.

With first-person combat in the mix, that would become even more complicated players will have to aim their attacks, Skyrim-style. Adding a new player perspective to the game isn't as easy as it seems either. Whenever you add a new perspective and want to do it well, you need to modify everything from character animations to environment fidelity and interactions.

Even though games like Red Dead Redemption 2 make the transition look seamless and Speclizer's video is a great proof-of-concept, a lot of work would have to be done to make the game work in both styles. Still, if the developers can find a way to not only make third-person combat better but add a first-person mode as well, God of War: Ragnarok will be super replayable and let players experience the God of War franchise from a new perspective.