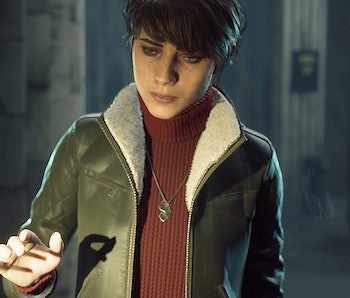 The Medium is creepy. It's an atmospheric horror game in the vein of Resident Evil where players explore dilapidated environments in two worlds. Of course, there's nothing scarier than getting stuck on a puzzle in a game and not knowing how to find the solution.

While the game is mostly straightforward, there's one puzzle in particular that can be tricky to figure out. Late in the story, you'll come across a locked door that requires a four-digit code to open. Finding the solution involves some careful investigation and a little math, not unlike Hitman 3's Mendoza vault.

If you're stuck, here's how to figure out the door code.

For context, this puzzle appears pretty deep in the game, after a sequence at a burned house. Once solving some puzzles there, you'll go underground into a rundown basement full of old children's toys. There's a big metal door in the room with a keypad used to input a code.

If you want a nudge in the right direction but still want to solve it yourself, we'll start with how to arrive at the solution: When you enter the basement, you'll find a room to your left and one tucked away a little less obviously on your right. Both rooms contain some papers you can pick up, which have different numbers on them. But the actual solution isn't here, so you don't need to waste time inputting those as combinations.

The only room you need to worry about is the one on your left, which contains a locker and a note on the table near it. Use your bolt cutters to cut the chain on the locker. You'll find an empty watch box inside, which notes that it was a gift given for a 10-year anniversary. That's a key clue that's easy to miss at first.

Now, investigate the note on the table next to the locker. You'll realize it's a receipt for the watch you just found. Look at the top of the page and you'll see the numbers 1976, which is the year that the watch was bought. See where this is going?

Yep, the door password is simply asking for the anniversary year. Take 1976 and subtract 10 and you get the code: 1-9-6-6. Now all you have to do is head over to the door, input it, and it'll slide right open. That's the power of basic arithmetic!

It's worth noting that this area has a lot of items to investigate, including a few Echoes. If you're going for 100 percent completion on the game, you'll want to make sure to investigate this space pretty thoroughly before moving on as you won't be able to return.

The Medium is now available on Xbox consoles and PC.