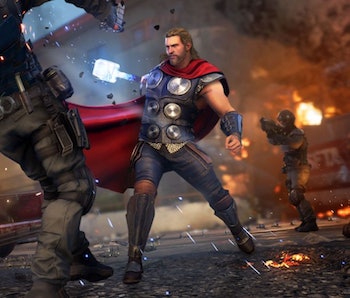 Marvel's Avengers can be challenging at times, especially if you don't have the right skills equipped. So it may be a good plan to try and max out your characters' levels ASAP. In similar live-service games like Destiny 2, hitting that level-cap is a crucial milestone. Especially because developer Crystal Dynamics is likely to raise the level cap in the future, it should be a priority for every player.

Every time you level up in Marvel's Avengers, you're granted a skill point you can spend to unlock new abilities. As your level increases, leveling up takes more and more time and experience. Whether you're getting battered by a particularly challenging boss or just want to hit the level cap as soon as possible, here are the two best methods for leveling up fast.

How do you level up quickly in Marvel's Avengers?

Each character in Marvel's Avengers can reach the level cap of 50. Getting to that cap could take numerous missions and dozens of hours if you're playing normally.

Alternatively, there's a way to reach the milestone in just 90 minutes.

To cheese your way to the level cap, all you need to do is spend time with some HARM room training found on the Chimera. After unlocking a character, you also unlock an associated HARM room training level designed to walk you through all the miraculous abilities the character can perform. At one point in every HARM room, you'll be instructed to perform a character's attack three times. All you need to do is refuse to use this attack and instead use another move, killing enemies with your other skills.

The HARM room will infinitely spawn more foes, granting an infinite supply of XP. If you have the patience, this can be used to let you steamroll your way to level 50.

If you'd prefer something more legitimate, try doing mission chains. Each one doles out a hardy helping of XP upon completion.

How do you increase your Power in Marvel's Avengers?

The other metric to keep track of in Marvel's Avengers is called Power.

This is distinct from the character level and dictates your damage output, defense, and other stats. If you don't have the correct Power, you could be barred from enjoying certain missions. Power is capped at 150. If you can hit the cap fast, the whole world will open up for you.

The best way to make that happen is with some vault hunting.

SHIELD vaults contain troves of gear and other valuable resources. If you can find and enter a vault, you're sure to find some gear that will increase your power. The most surefire way to find a vault is to fire up the Stark Realities mission in Utah Badlands.

There will be a pair of objectives nearby that can be used to unlock the Snowy Tundra vault on your War Table. Additionally, there's also a vault that can be found within Stark Realities itself.

When you enter the mission, follow the river on your left until you reach a cliff. This should prompt a small radar to appear on your HUD. Follow the radar to find a SHIELD vault. Your goal is to get the number below the radar to zero. If you can, you'll have found the vault. The vault should be located in an open glade, represented by a teeny white siren.

Inside, you'll find tons of gear and perhaps coordinates to another vault, the desert SHIELD vault. That's three total vaults from this single level. Complete each one, and you'll hit the level cap in no time!

This article was originally published on Sep. 8, 2020