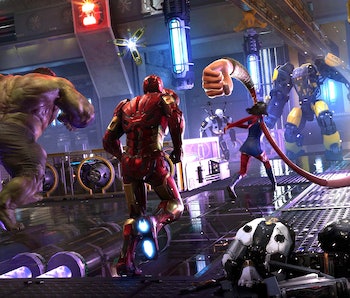 Welcome to the Marvel's Avengers beta, where you and your friends play as the world's most popular superhero team. The single best mission in the beta is a secret that you'll likely miss out on if you don't know where to look for it. The Snowy Tundra Drop Zone is easily the best experience of the whole lot. Here’s how you access it.

What is the Snowy Tundra Drop Zone in Marvel’s Avengers?

Remember that early campaign mission, Missing Links? Where Kamala and Dr. Banner raid the A.I.M. facility in a snowy landscape? The space was open, fun, and yet you couldn't return to it after the mission concluded. Guess what? You can return to it via the Snowy Tundra Drop Zone.

When you arrive, your primary objective will be to locate a SHIELD vault and secure its contents. If you complete the main objective, you’ll be awarded a piece of Epic tier gear. Don’t do that just yet.

The Snowy Tundra Drop Zone is a fully explorable area brimming with chests that contain high-level gear and other side objectives. Each one makes the world feel amazingly vast. This was the most enjoyment I found in the beta, and you should take your time to enjoy it, too.

How do you unlock the Snowy Tundra Drop Zone in Marvel’s Avengers?

If you scour your map after unlocking the War Table, you won’t be able to directly locate the Snowy Tundra. It’s an unlockable mission that requires you to find coordinates in another mission: Stark Realities.

Once you begin Stark Realities, complete every side objective you encounter. Locate side objectives by pressing up on your D-pad, prompting markers to appear on your HUD. Each objective will have a chance to drop coordinates for the Snowy Tundra mission.

If you leave Stark Realities and Snowy Tundra still hasn’t shown up, don’t worry. It doesn’t mean you did anything wrong. A Crystal Dynamics developer has confirmed to Inverse that there’s a random chance for the Snowy Tundra to unlock from completing these side objectives, which essentially leaves this drop up to a matter of chance random number generation (RNG for all sorts of drops is a hugely popular mechanic in similar games like Destiny, Anthem, The Division, etc.). Crystal Dynamics has increased the chance at the coordinates dropping significantly for the beta, but it will probably be much rarer in the final build of the game.

Try replaying the Stark Realities side quests over and over again, and you’ll eventually get access to Snowy Tundra Drop Zone.

Even if you’re lucky enough to unlock the Snowy Tundra in the Marvel’s Avengers beta, it’s unfortunately not permanently open, at least from Inverse’s experience.

The Snowy Tundra Drop Zone disappeared from our map immediately after being completed. We were required to complete the Stark Realities prerequisite yet another time to access the Snowy Tundra a second time.

Crystal Dynamics could change this in the future, allowing the Snowy Tundra to stay unlocked even after completion.

If I’m playing with friends, do they need to unlock the Snowy Tundra Drop Zone as well?

No, they don’t. If you have the Snow Tundra Drop Zone unlocked, mark it on the War Table and your friends can join the mission immediately without completing Stark Realities.

Marvel’s Avengers will launch on September 4.

More like this
Gaming
5.16.2022 8:22 PM
PS Plus library includes a rad Red Dead DLC and 7 more secret gems
By Joseph Yaden
Gaming
14 hours ago
Sony's new PS Plus rollout is already a convoluted disaster in Asia
By Robin Bea
Gaming
5.20.2022 2:00 PM
Everything you need to know about the Marvel’s Wolverine game
By Tomas Franzese and Joseph Yaden
Related Tags
Share: