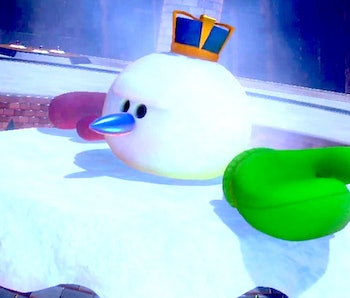 The Snow King boss in Mario Golf: Super Rush is tough. By the time you reach him, you’ll probably know your way around all the courses and have mastered the unique mechanics the game has to offer. But even still, this boss might be challenging for you. Snow King is found at the end of Adventure Golf mod, which serves as the game’s single-player campaign.

You’ll play as your custom-designed Mii character in this single-player battle, and unfortunately you won’t be able to get help from your friends. Luckily, we’ve got the scoop on how to take down the Snow King.

In this guide, we’ll walk you through all three steps for defeating the final boss of Mario Golf: Super Rush. We’ll break each of these down in greater detail below:

When you start the battle, you’ll notice a body temperature meter in the upper left. This serves as a time limit for the fight. If the temperature reaches zero, it’s game over, so you must defeat the boss before that happens.

The boss arena is a circle and surrounding it are four colored crystals. As you might expect, you need to hit these crystals in order to make the Snow King vulnerable. The problem is that you must dodge the boss’ attacks as you make your way to each crystal.

You’ll notice a purple circle on the ground telegraphing the Snow King’s attack. We recommend saving your special dash for these sections to keep yourself safe. Run around like normal and when the ice is about to hit you, use your special dash to get away quickly. Then, make your way to a nearby bob-omb to damage the crystal.

You’ve got three tries per crystal, so make sure you’ve got the correct club equipped. In general, you should aim to hit the bob-omb relatively hard, as it’s easier to undershoot than it is to overshoot. Make sure you pay attention to the distance indicated by the strike meter on the right.

If you’ve done it correctly, the crystal will no longer be illuminated. Take note of the beams connecting the crystals to the boss. You need to take down whichever crystals are connected to the Snow King. Repeat this a second time and then the Snow King will fire another attack at you. This time, a mound of snow will appear on the ground, which you can interact with.

Once you interact with the mound of snow, the boss will shoot a projectile at you. A small indicator will then appear on-screen, and you need to time it just right to bounce it back at the boss. If done correctly, you’ll take out a third of the Snow King’s health.

After the boss has taken damage, it will then send small enemies at you, along with his now-familiar aerial attack. The strategy is the same: save your special dash to get away at the last moment. Then go back to damaging the crystals to make the Snow King vulnerable.

With this being a Nintendo game, it follows the “rule of three,” meaning you must damage the boss three times to win. As you make your way to the crystals, be sure to jump over any AoE attacks from the boss. Use the large pillars that surround the boss to take cover from any of the enemy’s attacks.

On the last phase, you don’t need to attack the crystals to damage the boss since he’s already extremely weak. At that point, only his head will appear, since the rest of his body has melted due to your attacks. Hit him a final time and the boss will go down for good.

Mario Golf: Super Rush is out now for Nintendo Switch.