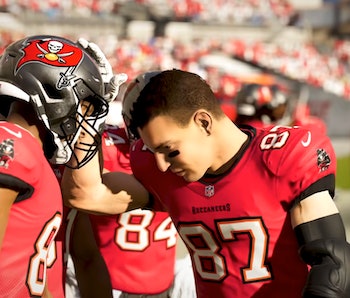 The most powerful and inspiring scenes from movies like Remember the Titans or television shows like Ted Lasso are when the coach delivers an inspiring pep talk for the losing team at halftime, and they go on to win.

As a more hardcore football sim, EA’s Madden football games don’t have anything that simulates the most inspiring part of the sports experience for players and coaches.

Many of the new features being introduced in Madden NFL 22 do focus more on the emotion of the players and fans and the tough decisions coaches have to make mid-game, but the franchise could go even further.

For Madden games to hit the same emotional beats as classic sports stories EA might have something to learn from an expected place: Eidos-Montreal and Square Enix’s Marvel’s Guardians of the Galaxy.

The main feature Madden games could stand to learn from Guardians of the Galaxy is, ironically, something called the Huddle mechanic. Senior Gameplay Director Patrick Fortier detailed this mechanic in an interview with Inverse.

“The Huddle is a team boost that’s player-controlled and fueled by the Momentum Gauge,” Fortier tells Inverse. The Momentum Gauge is already oddly reminiscent of Madden NFL 22, and Fortier’s comparison to a motivational football speech only becomes more apparent as he continues to explain it.

“A lot of times it's used when the chips are down, but it could be when things are going really well, you just call it,” he says. “Then Star-Lord comes in football-style, you’re in first-person, and you have to pay attention to what they need ... As a player, you’re choosing whatever you feel is the appropriate motivational speech.”

If players choose the correct lyrics to classic ‘80s songs and pull the Huddle mechanic off, the entire squad might wind up with all sorts of different boosts, including accelerated cooldowns.

Obviously, a comedic sci-fi romp is significantly different from a serious sports simulator. Still, Madden NFL 22 and beyond might have something to learn from Eidos-Montreal’s superhero game.

Several features in Madden NFL 22 involve a new “Gameday” system. Specifically, Gameday Momentum is a more palpable gameplay addition that introduces new M-Factor buffs and debuffs depending on a team’s performance and how well the player performs during a game.

Players even now have the option to switch their Gameplan at halftime, which can help you properly focus on any new offensive or defensive patterns that might emerge from your opponent during the game.

After Inverse went hands-on with the community playtest, it’s clear that these new features are interesting game-changers that will have a major impact on most games. By learning from Guardians of the Galaxy, EA could augment and make these modes a bit more exciting.

Imagine losing a game by a lot at halftime and having the opportunity as a coach or star quarterback to say something that could motivate your team and possibly start a rally. It would get the player more invested in the emotional stakes of each game and callback to classic moments in beloved sports movies.

This additional gameplay depth would be welcome, especially in more cinematic modes like Face of the Franchise or the regular franchise mode. It’s unlikely that this mechanic will ever be implemented in the same way Guardians of the Galaxy does it, but EA Tiburon should at least look to the upcoming RPG for inspiration as they expand the Gameday Momentum and gameplan systems in future Madden games.