'Guardians of the Galaxy': 1 mechanic makes it far goofier than 'Avengers'

“We wanted it to be organic, so you can have fun and go with the flow of this crazy adventure.” 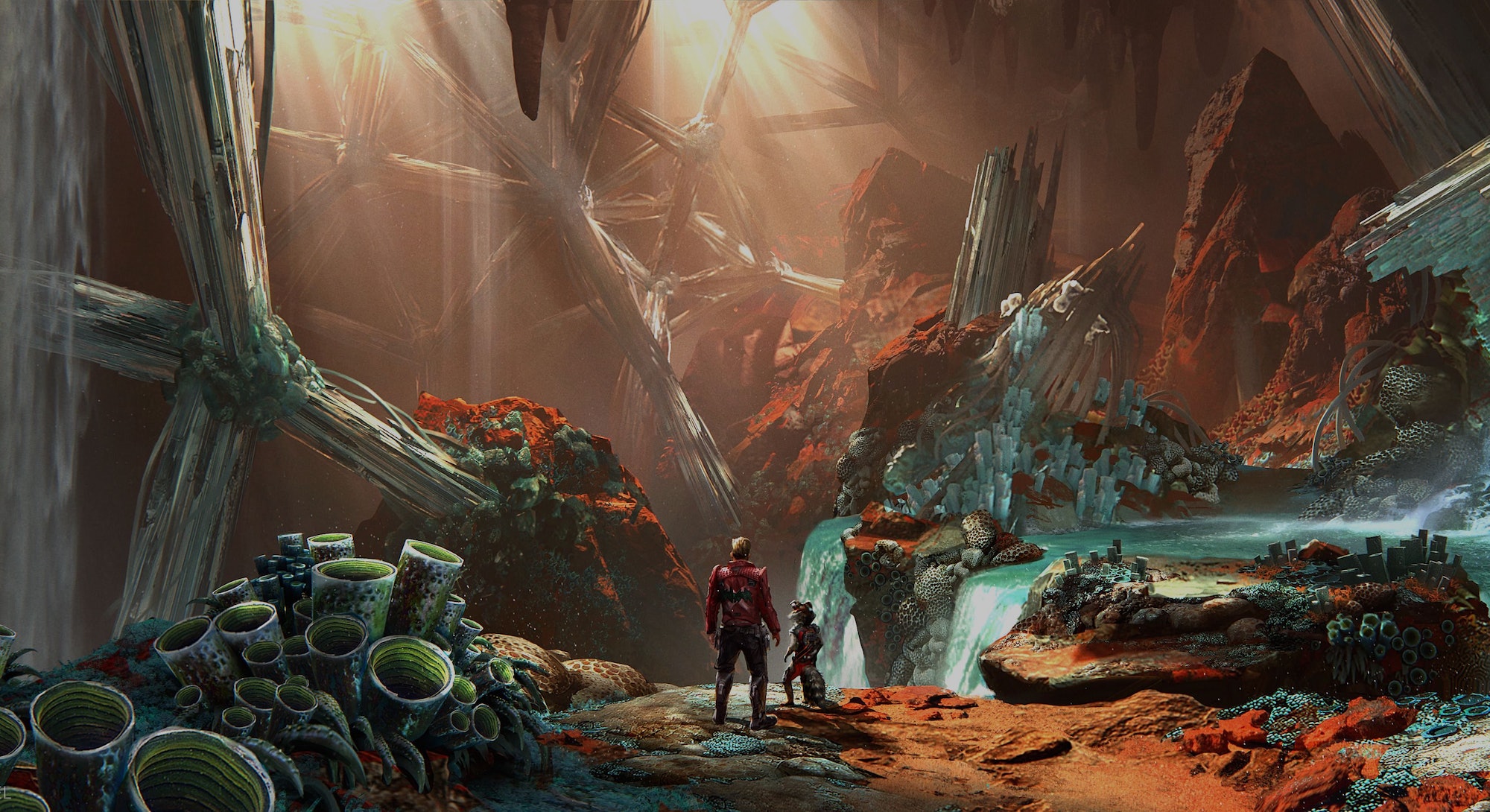 Once you arrive on the planet of Seknarf Nine in Marvel’s Guardians of the Galaxy, you’ll never feel bogged down by fiddly RPG systems like skill trees.

Even if you do encourage Drax the Destroyer to throw Rocket Racoon over a chasm to activate the bridge controls on the other side, and you see a little Telltale-style sentence that the fuzzy critter will angrily remember this, it’s not the end of the world — or the galaxy. But Rocket’s memory will have a lasting impact on how things play out.

“We’ve all played games where somebody's yelling in the basement, and they need help,” Fortier says. “But then you're like, ‘Okay, I know I need to help you … but let me just check all these drawers first.’ We wanted to avoid that. How do you move on and have fun?”

In Guardians, you move on by making snap decisions and never looking back until you’re forced to. The light role-playing elements, customization options, and core gameplay mechanics are designed to highlight the witty banter and character dynamics rather than encourage any kind of loot grind. The squad-based combat, frequent opportunities for banter, and sparse unlockable abilities look like a mashup of Final Fantasy VII Remake and Mass Effect, but the customization is far more streamlined and subtle.

For a deeper look at how an innovative “LocoBanter” team shaped the experience — and what happens when you piss off Rocket too many times — read our interview with Fortier and Senior Producer Olivier Proulx below.

What are your favorite games and platforms of 2021, and what future releases are you most excited about? Take our poll!

How do dialogue options play out over time?

Fortier: We didn't want to go too far towards micromanagement. But there are three levels of choice and consequence.

There’s fun stuff where you can be playful with the team, banter choices as you’re walking along. Then there’s more advanced stuff like with throwing Rocket. There’ll be other obstacles later on where there are consequences, and you’ll get a clear understanding that now you have to find a different solution. Then there are other moments where you do have to make a quick decision that plays out in a much longer term.

It might be many chapters later when suddenly you have a tool for this fight because of a choice you made, or the inverse. There’s no real right or wrong, but they do manifest themselves in tangible ways.

Proulx: The Memory System that you saw that’s Telltale-style, that’s something we added quite late. Testers would trade stories about how chapters would play differently, and were getting more excited by the game. So we said, let’s be super obvious about it. It’ll say characters will remember, and later it’ll be called back to.

As you're traveling about the galaxy, do you fly the ship at all?

Fortier: It's really more of a narrative-driven action-adventure. There are these moments on the Milano where you can chitchat with the group and upgrade your gear. But the story is driving the flow of the game. There's not a lot of fat in our game. It all has to do with the main plot and the overall character growth.

Proulx: To that point, the game is structured a little bit like comic books: When you get through to the end of a chapter, there’s always a high point, and then you move on to the next adventure.

In between those chapters, we're back to the Milano. If you go click on the pilot seat, you move forward and get the next cutscenes in the adventure. But you can listen to music on the jukebox in the corner. We have 31 licensed tracks that are used in different ways. And the Guardians are there for optional conversations. You can also find some narrative objects on missions that trigger deeper conversations.

How often can we expect this level of banter?

Fortier: They talk pretty much all the time. It got to a point where it felt weird when they're not talking.

The whole idea of going with a narrative-driven thing was to give room for these characters to shine and just to have this ensemble feeling as you're exploring that just sounds natural.

They're not just chatting about, “Our objective is to our left!” It’s more of their personality shining through or they're still angry about things that happened or Drax has these legends about Lady Hellbender. It adds a lot to the game. The journey is greater than the destination itself. And it gives back the more you give to it.

Proulx: We actually created a “LocoBanter” team — so locomotion plus banter — and we developed a whole host of AI tech and tools. We had people authoring the Guardians. We didn't want them to feel like AI puppets. Even how they traverse and react to banter was very delicately done by us.

Is Guardians more of an action game or an RPG?

Fortier: A lot of action-adventure games have light RPG elements in terms of choosing skills and things like that. We do that as well, but we didn't want to overstep to the point where you're so driven by those mechanics that you don't pay attention to what's going on.

Depending on how well you perform in combat, there’s a Momentum meter and different adjectives to encourage you to stay engaged and be creative. You'll get bonuses and then ability points that you use to unlock new abilities for all of the different Guardians.

We didn't want to go overboard with relationship meters or anything like that. We wanted it to be organic so you can have fun and go with the flow of this crazy adventure.

Since you control Star-Lord, how do other character actions work?

Fortier: For traversal and combat, it’s a unified system. You hold the left shoulder button, and the face buttons correspond to each Guardian. In traversal, it manifests in specialties. Drax is very strong and can pull or carry stuff. Gamora has her blades so she can cut stuff or hook into something to give you a boost. Rocket is technologically based so he’ll do some hacking. Groot uses vines to create bridges.

In combat, they have their main identity. Drax is more of the one who’ll do stagger damage to shake up many opponents. For the killing blow, Gamora does the single most damage on a single enemy. Rocket is more ranged and controlling the area. Groot is defensively based, immobilizing enemies or pushing them back to keep everybody safe.

Proulx: It feels like you’re playing the whole team at the same time when you get into the game flow with all of these actions. You have those fun gameplay loops that start emerging.

How does the huddle mechanic work?

Fortier: The Huddle is a team boost that’s player-controlled and fueled by the Momentum Gauge. A lot of times it's used when the chips are down, but it could be when things are going really well, you just call it. Then Star-Lord comes in football-style, you’re in first-person, and you have to pay attention to what they need. What is the context of the fight? Are we kicking ass and feeling a little overconfident so they need to calm down a little bit? Or are they getting their butts kicked? Then they need a boost.

Peter, being a child of the ‘80s and having all this music in his Walkman, creates motivational speeches by inspiring himself from song lyrics. As a player, you’re choosing whatever you feel is the appropriate motivational speech.

All your cooldowns get reset. Peter always believes whatever he’s selling, so he gets a boost. But the team might not respond well. If you do get it right, Peter hits the play button, and the song plays. You fast-barrage all kinds of abilities and wipe out the battlefield.

Marvel’s Guardians of the Galaxy will be released October 26, 2021.