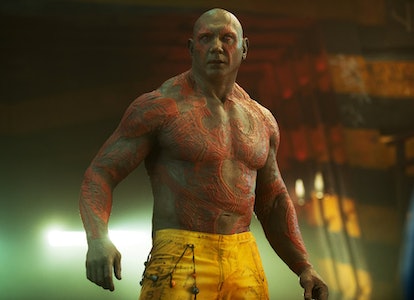 Drax the Destroyer doesn’t pull any punches, and neither does Dave Bautista. The professional wrestler turned Marvel movie star recently went on a press tour and made his feelings about Marvel Studios and its handling of the Guardians of the Galaxy franchise clear.

To put it as bluntly as the Destroyer himself: Bautista thinks Marvel failed to fully develop his character. And it turns out, the comic book legend who created Drax agrees. Jim Starlin tells Inverse that while he thinks Bautista did a “bang up job” in the role, he agrees with the actor on a few key points.

“Rocket got more in his retelling, and Gomorrah got the lion's share of it,” Starlin says. “But I thought Drax was the best of the lot of those characters. He's certainly the comedic star.”

Then again, did Drax really need a deeper backstory?

“I didn't think he needed any more to tell you the truth,” Starlin says. “It's pretty simple. He's a big hulking brute who lost his family.”

Starlin — who created Thanos, Drax the Destroyer, Gamora, and Shang-Chi for Marvel and wrote the comics that inspired Avengers: Infinity War and Endgame — also agrees with Bautista on one other pivotal issue.

“I can understand hitting 54 and not wanting to take your shirt off anymore.”

Ultimately, Starlin considers Bautista to be the funniest thing about the Guardians movies, but he sees how Marvel can continue the franchise even if the original Drax moves on. One word: recast.

After all, how many Spider-Men and Batmen have we already seen onscreen? It’s only a matter of time before the Marvel Cinematic Universe is forced to replace one of its biggest stars.

“The Marvel Universe is going to keep trucking along and they found that they have made money on cosmic stuff,” Starlin says. “So they will more than likely are going to do more of it. There may be another Drax down the line; somebody else who hopefully has half the comedic timing of Bautista.”

Meanwhile, another of Starlin’s Marvel creations is about to join the MCU in Shang-Chi and the Legend of the Ten Rings. Starlin hasn’t had any involvement in that movie either, but he was hoping for a cameo before Covid-19 made that all but impossible.

“Maybe the next one. Yeah, fingers crossed,” he says. “Me and Steve [Englehart] will be two old guys in the back of a restaurant.”