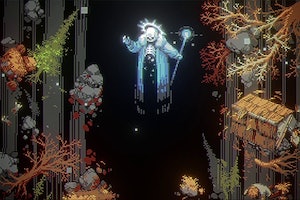 Loop Hero is deceptively complex. While the smash hit indie game revolves around an easy-to-understand looping concept, it’s also loaded with systems borrowed from other genres. It’s a mash-up like Hades where multiple familiar game mechanics fuse together to form something truly novel.

On top of its roguelite and idle elements, the game features a modest deckbuilding mechanic. Players pick a pack of tiles that they can bring into each of their runs. Tiles can be placed on the map, and each one has a different effect. Some spawn resources, while others place more enemies on the path.

What Loop Hero doesn’t tell you is that certain tiles have secret effects that trigger when placing them in a certain way. They can range from giving your character extra heals to calling more powerful enemies into the battlefield. While there are tons of combos to discover, some good and some bad, here are the ones you should definitely know about before jumping in.

Hungry Groves can be a bit of a blessing and a curse, but the good outweighs the bad. To create these, place a Blood Grove tile next to a Grove. Then use an Oblivion card to destroy the grove and voila. Hungry Groves will basically attack you and your enemies when battling near it. It can hit the player and cause some damage, but it also can completely kill enemies that are down to 20 percent health. It’s a fair trade and one that makes certain battles go by a little quicker, even if you leave them with a few scratches yourself.

Once you unlock the Forest, you’ll get a whole mess of useful new combinations. Burned Forest is a great example of what you’ll be able to do with your new tile. To create this, place a Storm Temple next to a Forest or Thicket. That’ll burn the trees and grant you extra magic damage as a result.

Treasuries will grant you some extra resources for each tile you place around it, including ones on its diagonals. You’ll actually get even more resources for filling up all eight of those slots, making this a must-know combo for gathering runs. Whenever you get a treasury card, make sure to place it somewhere that has eight open slots around it to make sure you can get the most out of it.

Towns are great if you’re looking to boost how many perks you gain in a run. Arrange five suburbs in a plus sign formation and it’ll turn into a town. This structure grants players an extra two experience points every time they kill an enemy. That really stacks up over time, especially if you have multiple towns, meaning that you can load up on powerful abilities faster.

Once you’ve got the ability to create rivers, you’ll want to learn how to create an Oasis. To do this, simply place a Sand Dune next to a River. It’ll drop your attack speed a little, but drop your enemies’ attack speed even more. This is especially great for character builds that center around high damage strikes and criticals rather than smaller, speedier hits. With the right gear loadout, you’ll be able to crush enemies while barely taking a hit yourself.

This game’s most fundamental tile is also its most useful. Blooming Meadows are created by placing a Meadow tile next to a Rock, Mountain, or Treasury. When you do that, the grass will “bloom” and it’ll heal you for an additional 3 HP every time you loop. To get the most out of your meadows, you want to try building a sort of checkerboard pattern. Place a rock and then place meadows around it in each cardinal direction. Build out like that rather than just placing meadows at random and you’ll get a significant chunk of health back at your camp.