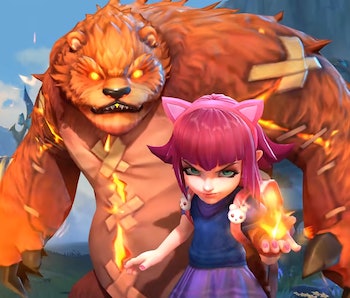 On May 29, Keighley and several Riot devs showed off new Wild Rift gameplay, giving us a better idea of how the game will make the transition from PC to console and mobile. The game uses a dual-stick control scheme to make up for the lack of a keyboard and mouse, but otherwise appears to be a faithful, albeit streamlined, version of the MOBA beloved by millions.

In addition to showing gameplay, the developers also confirmed Wild Rift will enter an alpha test on iOS and Android in the Philippines and Brazil next week. The developers are using this test to see what people think of the gameplay modifications before rolling it out to a wider audience and more platforms.

The video also highlighted 36 legends from the PC game that will be available in the Wild Rift alpha. It isn't everyone, but the roster certainly isn't small. The kits (move sets) of some legends have also been modified for Wild Rift, further cementing the fact that this isn't the same game. Microtransactions will exist for cosmetic skins, but all champions can be earned for free.

While all of the major systems from the PC version of League of Legends are present, Riot has taken steps to streamline the keystone rune system and jungles, so matches only last about 15 to 20 minutes. Wild Rift will even have tutorials and an option for co-op matches against AI, so newcomers can practice. Due to all of these differences, it won't have cross-play with PC at release, but those who have played League of Legends before will get some in-game bonuses.

This all lines up with Riot's previous statements on League of Legends: Wild Rift. The game's website explains that the developers have "refreshed models, animations, game systems and more" and explained that the team "didn’t want to just port League on PC 1:1—we want to make sure Wild Rift feels like it was designed for new platforms, and use that opportunity to make a bunch of improvements to the game."

The Inverse Analysis -- League of Legends always has felt a bit too daunting to get into, but I will definitely give it a shot once it's available on consoles. Other curious gamers probably feel the same, so this is a smart move for Riot Games to grow League of Legends' audience even further.

While it remains to be seen how well League of Legends: Wild Rift will actually play and if the streamlined elements will work well, Riot Games Design Director Brian Feeney claimed in a post-reveal interview with Geoff Keighley that the changes "shouldn't even be felt by players." Despite that, League of Legends: Wild Rift differences in control, some mechanics, and move sets show that this is a new version of League, not a lazy mobile and console port.

Wild Rift will release later in 2020.

More like this
Gaming
6.29.2022 9:00 PM
Everything we know about Tower of Fantasy, the upcoming Genshin Impact rival
By Jess Reyes
Gaming
6.23.2022 12:30 PM
Known gamer Ted Cruz would love these 6 pay-to-win games
By Willa Rowe
Gaming
6.22.2022 5:30 PM
Diablo Immortal is one of the decade's biggest gaming letdowns
By Steven Asarch
Related Tags
Share: