Last of Us’ bug mistaken for Easter egg — 7 years later

"As the one who scripted this sequence ... sounds like a bug." 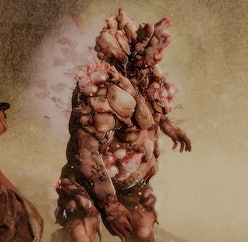 Video games are brimming with Easter eggs. Developers will hide delightful secrets for players to discover, like new games or sly references to fan favorites. There are even cases of game-changing Easter eggs going undiscovered for years after launch!

But sometimes, a bug is just a bug.

The latest example came true this week with The Last of Us, which launched in 2013. Players thought they discovered a super-secret easter egg after seven and a half years, but it turned out to just be a bug in the game's code.

What was the "Easter egg" — On January 9, streamer Anthony Caliber posted a video titled, "Cordyceps-Infected Ant on TV" Easter Egg in The Last of Us," (video below) as one of the members of his Discord found what they thought to be the game's final hidden easter egg: a picture of a Cordyceps-infected ant on a TV that normally just shows static.

To find this secret, players need to quit and reload the game after passing a checkpoint at the bottom of the stairs in Joel's house. If you go to Joel's room after doing these, the image of the ant will appear on the TV. This discovery was lauded as a cleverly hidden Easter egg hinting at the infection that ultimately created The Last of Us' zombie-like Clickers. The series is no secret to Easter eggs, with its sequel adding one in a post-launch update.

Not an Easter Egg — Over the next several days, this discovery was lauded by fans of The Last of Us. It was considered the final major Easter egg by fans and reported on by major websites like Bloody Disgusting and IGN. This didn't seem too out of the ordinary for a video game, especially when one considers that an intentional Nier Automata Easter egg that allows players to skip to the end of the game was found earlier this month.

A tweet about this supposed easter egg by IGN caught the attention of Kurt Margenau, the Co-Director of The Last of Us Part II and developer who scripted the opening of the first game. "As the one who scripted this sequence ... sounds like a bug tbh," he tweeted. "I could be misremembering 7 years ago but I think the flipbook of the ant was like a default shader test thing, and it appearing is probably me not initializing something correctly."

Easter Egg vs. Bug — The term "Easter egg" has been used to describe hidden secrets in games and other media ever since designer Warren Robinett hid his name in the classic Atari video game Adventure and Atari decided to include "Easter eggs" in games for players to find, just like a real-life Easter Egg hunt.

Meanwhile, "bug" is a term used by software developers for errors in code, and has made its way into gaming as developers and players also use it to refer to the glitches and issues they come across. So, is this image of a Cordyceps-infect ant in The Last of Us a bug or an Easter egg?

While you'd have to look at the game's code to confirm this for sure, it's most likely an unintentional bug that was never meant to be discovered and cause such a stir. Even though Margenau does admit that it could be intentional and he's just forgotten why it was included, the fact that this image was a default shader for the game does add credibility to the fact that it is literally a bug.

The Last of Us: Definitive Edition is available now for PS4.