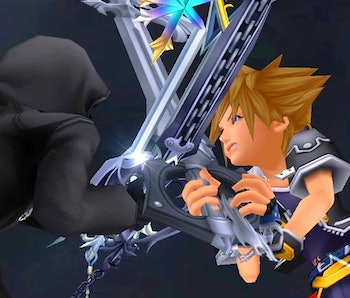 Dust off your keyblade, because Kingdom Hearts III is back. The recent 1.07 update that dropped ahead of the game's Re Mind DLC also added two of the coolest and most powerful keyblades of all time, Oathkeeper and Oblivion. However, unlocking them is no easy task, even for the most hardcore players of Square Enix's Disney and Final Fantasy crossover series.

Here's what you need to know in order to unlock Oathkeeper and Oblivion and all the form changes and abilities that come with them in Kingdom Hearts III Re Mind.

What are Oathkeeper and Oblivion in Kingdom Hearts?

In the lore of Kingdom Hearts, Oathkeeper and Oblivion are representative of Sora's memories of his two best friends, Kairi and Riku, respectively.

Oathkeeper is a powerful keyblade of light that was formed during the events of the first Kingdom Hearts when Sora attached Kairi's Wayfinder lucky charm to his active keyblade, ultimately making it a reminder of Sora's promise that he'd return to Kairi one day.

Oblivion is essentially a dark keyblade typically wielded by Riku, but during Kingdom Hearts, Sora acquires it shortly after defeating Riku in battle. In Kingdom Hearts II, Sora receives it when reuniting with Riku and Kairi in The World That Never Was towards the end of the game.

Here's where things get a bit confusing: Because Sora had the heart of Ventus inside his own at the time he was transformed into a Heartless during Kingdom Hearts, his Nobody Roxas can wield two keyblades at once. In most of his appearances, Roxas wields Oathkeeper and Oblivion — including when he's resurrected towards the very end of Kingdom Hearts III — seemingly just because Kairi and Riku are so important to Sora.

How do you unlock Oathkeeper and Oblivion in Kingdom Hearts III Re Mind?

To unlock these two keyblades for Sora in Kingdom Hearts III, players will have to earn the Proof of Promises for Oathkeeper and the Proof of Times Past for Oblivion. Once earned, these key items can be traded in at the Moogle Shop located near every save point to acquire the keyblades. To get each Proof, however, players will have to accomplish some of the game's most difficult trials first.

The Proof of Promises is awarded to players who complete the game on any difficulty and collect all 90 Lucky Emblems. Players have to photograph these emblems across the various Kingdom Hearts III worlds using Sora's gummiphone. They appear in the shape of the Mickey Mouse symbol as an indentation on a wall, peculiar rock formation, or in several other surprising ways.

The Proof of Times Past, which unlocks Oblivion, is a bit more challenging in that it requires a great deal of skill rather than just devotion to a repetitive task. To unlock it, players have to beat the game on Critical Mode, the ultra-challenging game mode added to Kingdom Hearts III in April's version 1.04 update. Sora gets half the HP and MP, he gets fewer situational commands and less access to magic, and enemy A.I is much more advanced.

Thankfully, that's now easier than ever with the new Re Mind Premium Menu. Whenever you start a new game with Re Mind installed, you get an additional option during the "Dive to the Heart." In the sequence where you determine what kind of adventure you want, an additional option appears where you can select between a Normal, Easy, or Challenging Adventure. Fast Pass EZ Codes in an Easy Adventure overlap with Critical Mode, so while enemies are much more challenging, the codes make it absurdly easy — and it still counts towards earning the Proof.

For anyone who hadn't already acquired all the Lucky Emblems and beaten Critical Mode, your best option is to replay the entire game on Critical with EZ Codes active. It'll be a breeze with automatic HP, MP, Focus, and Formchange regeneration, along with unlimited AP for abilities and more.

How do Oathkeeper and Oblivion compare to other keyblades in Kingdom Hearts III?

No weapon in any Kingdom Hearts game compares to the Ultima Weapon, but if you haven't taken the time to unlock the latest version of Sora's best weapon in Kingdom Hearts III, then Oathkeeper and Oblivion are some of the best weapons available. Assuming you have every keyblade in the game, then Oathkeeper and Oblivion wind up sharing the slot for the third-best keyblade.

Ultima Weapon comes fully upgraded with 13 Strength and 13 Magic with potent abilities and form changes attached, making it the best overall weapon in the game. The Classic Notes keyblade obtained by completing all 23 Classic Kingdom mini-games boasts 11 Strength and 14 Magic, which means it has even higher magical potency. Fully upgraded, the Oathkeeper is balanced with 12 Strength and 12 Magic, granting access to a Light Form and a Double Form finisher that lets Sora wield two keyblades at once. Oblivion's final stats are 13 Strength and 11 Magic, making it just as strong as Ultima while granting access to Dark Form and Double Form.

Because Sora can only equip three keyblades at once, it's probably best to equip Ultima Weapon, Classic Notes, and then either Oathkeeper or Oblivion depending on whichever flavor you prefer. They're more or less the same, but equipping one of them for access to Double Form is absolutely worth it.