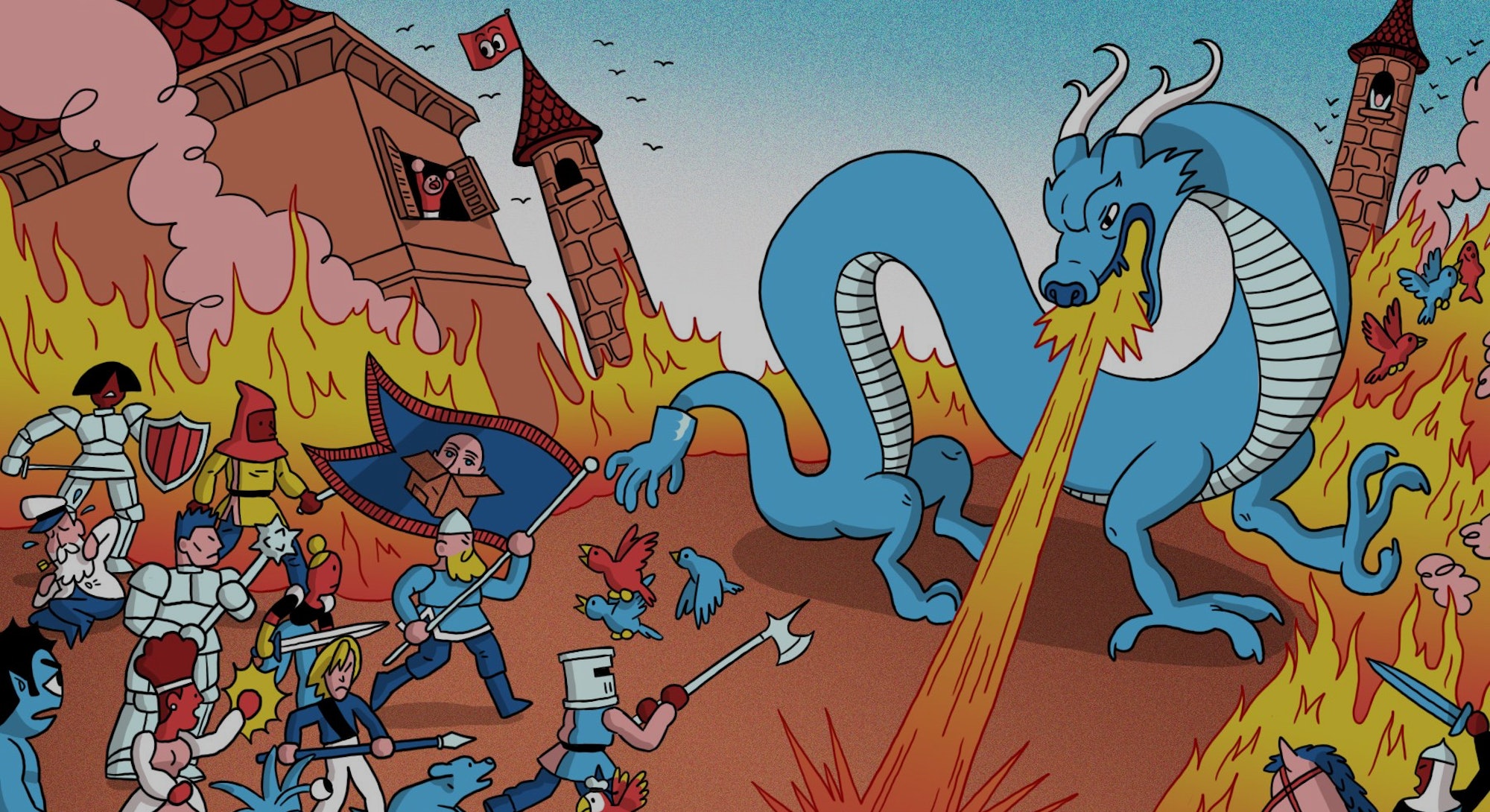 The metaverse is coming, whether we want it or not.

And just as Jackbox Games kept people connected during the pandemic, CEO Mike Bilder assures Inverse that the developers behind hits like Drawful and Quiplash could soon bring their remote party games to a digital metaverse.

“It makes all the sense in the world if there are a ton of people gathering in that space, and they’re socializing, that our games should be a part of that,” Bilder tells Inverse.

Inverse spoke with Bilder just before the launch of Jackbox Party Pack 8, which includes games like Weapons Drawn, a murderous social deduction experience where everyone plays as killer and detective. The team is already at work on the ninth annual pack, which should be released next October.

What place does Jackbox have in a world of immersive virtual spaces? What does it take to make a good party game? Would they ever consider a Fortnite crossover? Here’s our conversation with Bilder all about the evolving future of Jackbox Games.

Jackbox is known for its silly and accessible approach to humor.

What makes a good party game?

When we make a pack of games, we want to make sure that there are a handful of games that are pretty easy to get into, that don't require a lot of instruction or setup, games like Quiplash, or in this last pack, Job Job.

One of the advantages of making a pack of games is that we can have a bell curve. We can have games like Drawful: Animate or Job Job. Then we have some games in the packs that are a little more strategic. Some people will love them, and some people will not like them. But that's okay because, under the banner of a whole pack of games, there's something for everybody.

Weapons Drawn is a little more strategic. It takes a player to maybe to really understand the mechanics of it to hide your murders and solve other murders.

You recently pointed out that hardcore trivia buffs can drive away more casual players. How much do you think about that when designing new packs?

We think about that a lot. In Pack 8 we’ve got The Wheel of Enormous Proportions with a randomness factor in a trivia game.

If you're at a party, and you're playing a hardcore straight-up trivia game like Trivial Pursuit, and you're not particularly good at trivia or not particularly good at the subjects that keep coming up, you're going to feel stupid and deflated. You're not going to have fun. We want to make party games where everybody has fun, and everybody has a chance.

You might be advantaged if you have knowledge of a particular domain, but we're going to try and randomize subjects or topics so that everybody has an equal chance or if someone's really running away with the game, there are mechanics in the game that might level it out.

Having done this annually for eight years, we've really refined this process of paper and pencil concept testing, prototyping, pitching, and green lighting. There are dozens of pitches and a backlog of older ideas that made it pretty far through the process but don’t have a mechanic down quite right.

Some games have been pitched multiple times before they’re greenlit, like Trivia Murder Party and Push the Button. But every year there's something new. In Party Pack 8, there are four brand new games and some different mechanics in there. And there are always improvements that we're trying to make both in the game settings and in accessibility, like closed captioning and screen readers.

To what extent does Jackbox pay attention to the broader trends in gaming?

We’re all gamers (as you might expect), and we play traditional board games, parlor games, video games, and any “party games.” For years in the office, we’d play Murder — which is like Mafia or Werewolves — where you have your moderator and townspeople and some kind of murderer. We tried making a digital version that would do it justice, and that’s ultimately what Push the Button became: our hidden identity game. It just so happened to come out in a similar timeframe as Among Us.

We will absolutely pay attention to what's trending, and we'll try to come up with what Jackbox’s take is on that. I can’t say there’s a particular genre we’re chasing at the moment, but we have a backlog of strong concepts. We want a sense of accessibility and familiarity (in a positive way), but we don’t want to make games that feel derivative of each other.

What is Jackbox’s place in the emerging metaverse?

I still don't know that anyone has a clear picture of what the metaverse is, but if you envision a Ready Player One domain where people go to socialize, then gaming is going to be integral. That includes our social party games that bring people together.

How does that manifest? I need to wait and see how some of this evolves. As of right now, we don't have VR versions of our games. Some of the most elementary ways that people connect on any kind of social network are simple gaming like icebreakers. I think that's why companies like Epic are looking to move quickly there. Gaming is the way to bring a big audience to the metaverse and make it a little more mainstream.

It's not something we're actively building or working towards, but we're definitely paying attention to it.

I wonder if step one is like a more advanced Club Penguin or Fortnite. Do you think Jackbox could integrate into a metaverse like that?

Absolutely. We’re already on something like 12 different platforms at this point. Where there's a big audience, we will make our games available. I think that Epic Games is going to build it in Fortnite exactly as you said. They’re doing concerts, creator opportunities, and corporate sponsorships. They’re making communities and sandboxes out of their userbase, so the metaverse can organically grow out of that.

It's not necessarily “throw on a VR headset with haptic feedback and walk around as an avatar.” If that becomes a dominant, open-source environment for people to bring their games and address a huge audience, that's another platform. For us, it becomes, “How do we make our games work in this metaverse?” Do you still take out a phone to play? Are there other interfaces? How does the avatar work? Where’s the central screen?

It makes all the sense in the world if there are a ton of people gathering in that space, and they’re socializing, that our games should be a part of that.

What’s the level of interest in an Epic-Jackbox collaboration?

I would absolutely be excited about something like that, assuming it makes sense from a business perspective. How much work does that take? How do we put resources towards building that? How do we monetize it so it's worthwhile and not just an experiment? Beyond figuring out that kind of model, if there was a serious conversation around it, absolutely. We'd be all ears. Let's have that discussion and figure it out.