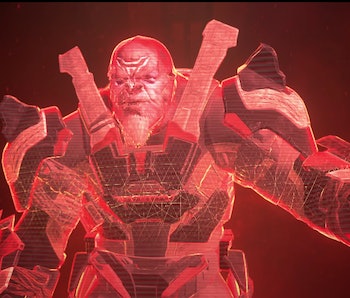 In 2020, 343 Games revealed loads of new footage for Halo Infinite at the Xbox Games Showcase, complete with gameplay and a brand-new villain with a flair for dramatic speeches. The new baddie doesn't connect to the Covenant, Guardians, Prometheans, or any of the other mainline antagonists. Instead, Halo Infinite's villain is from The Banished tribe, previously the villains in 2017's Halo Wars 2.

Who are The Banished? Do they all give off Planet of the Apes vibes? This is everything we know about the group and its leaders.

Who are The Banished in Halo Infinite?

Remember the brute enemies that have been around since Halo 2? They're the daunting, gigantic foes who acted as the Covenant's shock troopers in the original series. They received a considerable lore expansion in the expanded Halo universe. Now this species, known as the Jiralhanae, has oodles of backstory.

The Jiralhanae are structured like tribes, with Chieftans as their highest-ranking officers. This made them ripe for indoctrination by a more advanced race, the Sangheili, better known as Covenant Elites.

After an extended battle, the Elites subjugated the Jiralhanae, folding them into the Covenant. The initial conflict created tension between the two races and a deep hatred from Jiralhanae directed at Elites. Given their animalistic nature, most Jiralhanae found it quite difficult to resist the Covenant's far superior technology.

For years, the Jiralhanae remained subservient to the Covenant, regularly abused and mistreated by their Elite overlords. When the Human-Covenant war rolled around, a few rebel Jiralhanae decided to split off from the Covenant. This splinter faction was led by a Jiralhanae named Atriox.

In their earliest days, The Banished performed clandestine raids on the Covenant, all while growing their ranks using any Covenant that wished to defect.

The Banished took center stage as the villain group of 2017's Halo Wars 2. In the game, Atriox set his sights on Installation 00 (or the Ark), a forerunner artifact that can be used to control every Halo ring in existence. Atriox attempted to colonize the Ark with Banished forces in an attempt for the group to strengthen further.

A USNC group halted their nefarious schemes, but Atriox himself escaped capture. In retaliation, Atriox flooded the Ark. That’s the last we’ve seen of the group’s founder.

In Halo Infinite, the Banished are back in town, and they’ve got a new head honcho, Escharum, who leads the group on this specific Halo Ring. Their new War Chief has successfully aided The Banished in capturing a Halo Ring, and USNC bigshot Master Chief is forced to play defense. They plan to expand their reign even further.

Is Halo Wars 2 necessary to understand The Banished in Halo Infinite?

The Banished debuted in Halo Wars 2. Naturally, it could be assumed that you would need to play the tactic-based spin-off to understand their role in Halo Infinite. Nope.

In an interview with IGN, Halo developers Chris Lee and Paul Crocker stated, “We don’t want a game where players have to do homework to enjoy this game,” You won’t need to play anything other than Halo Infinite to understand The Banished and their motivations. It can be assumed that “alleviating gamer homework” is why they traded out Atriox for Escharum. Were Atriox included, it might imply that you needed to play Halo Wars 2.

Why did they add the Banished? Crocker says it’s because “Because they’re super cool and everyone likes them,” Fair enough.

Who is War Chief Escharum in Halo Infinite?

War Chief Escharum is the Banished’s new leader. After Atriox went missing-in-action during a battle against the Created, Escharum became the new head of the Banished. But unlike his predecessor, who opposed prejudice against other species, he rallies the tribe behind destroying humanity and the UNSC.

Escharum and the Banished were able to seize control of the Zeta Halo. But Cortana’s suicide bombing caused part of the Halo to detonate, rendering it inoperable. Soon after, Escharum encountered a mysterious entity known as “The Harbinger,” who offered the Banished her assistance in repairing it in exchange for helping her to unseal the Endless.