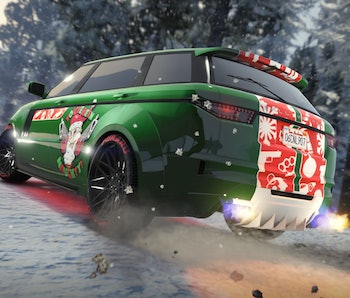 GTA Online just released its big Festive Surprise update, offering players a slew of awesome login bonuses including a free, and unreleased, new car. Want to know more about the Gallivanter Baller ST? Curious about the other awesome holiday goodies you can redeem just for playing? We’ve got a full rundown of the seasonal news below.

How to throw a snowball in GTA Online

It’s finally snowing in GTA Online, and that means you can start a snowball fight with anyone you meet. All you have to do is press left on the D-pad when your character has an empty hand. Throw a snowball just like you would any other projectile in the game. Your character picks up snowballs in stacks of three and can carry as many as nine at once. And yes, it is possible to kill other players with a snowball if you hit them squarely in the head.

What are the Festive Surprise 2021 login rewards?

As has been true in most years, players can unlock a sweet collection of login rewards by playing the game at any point through December 29. These rewards include:

How to get a Gallivanter Baller ST

Available completely free from Legendary Motorsport, the Gallivanter Baller ST is a brand-new car that won’t be available for the general public until 2022 when it sells for $890,000. You’ll get the Festive Stripes Livery for unlocking it during the free period.

What other discounts are in the GTA Online Festive Surprise update?