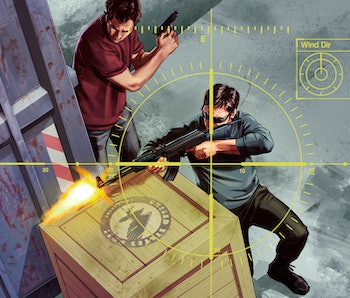 Grand Theft Auto V has such a wide variety of side missions that it can take gamers close to 80 hours to find and finish all of the many optional quests. This latest installment of Rockstar Games' sandbox crime adventure set the bar for how open-world games should let players randomly encounter new characters and world events.

Now that GTA 6 is reportedly in early development (and Rockstar has even responded to eager fans on Twitter about the unannounced title), it's time for the developer to consider how it can incorporate the beloved bounty missions from Red Dead Redemption 2 into the GTA 6 experience.

In RDR2, players can choose to work with law enforcement for several different towns to capture wanted criminals for a reward, essentially operating as a bounty hunter.

Unconfirmed GTA 6 rumors have claimed the game will put players in the shoes of an up-and-coming drug smuggler as they expand their narcotics empire in Vice City and parts of Latin America. A Western-style bounty system wouldn't really fit here, however, Rockstar could easily rework the concept in a novel way. They could even reuse one beloved type of missions from previous GTA titles to deliver on a Scarface-style bounty system reminiscent of RDR2.

As GTA 6 players begin to build their international drug ring, they should have the option to take a more hands-on approach to the day-to-day criminal activity that comes with being a kingpin. That could involve everything from roughing up an associate that hasn't paid his debts all the way to kidnapping the leader of a rival narco-trafficking organization to execute them.

It would be especially interesting if GTA 6 allowed players to choose to either do these side missions themselves or delegate them to one of their recruits to save time.

The catch would be that the more difficult or important the mission, the more likely something will go wrong if you delegate it. For example, if you hire a hitman to take out a rival dealer, there would a high chance that your hired gun might turn on you after your competitor offers them more money to kill you instead, or that they might fail and die in the process. That kind of high-stakes resource management would be compelling.

Turning these bounty-like tasks into missions you can complete in a variety of different ways can transform GTA 6 into the most realistic drug kingpin simulator ever made. Mixing that with Rockstar's undoubtedly wild plot will make the game's single-player campaign a dynamic experience that might follow the same general story, but the players' successes and failures can determine what kind of shady businessperson they want to be and what sort of hiccups they encounter along the way.

Rockstar had a barebones version of these types of quests in GTA 4 and earlier installments, called Vigilante missions. These vehicle-based tasks required players to chase down and kill other criminals as a way to bribe law enforcement to turn a blind eye to their own criminal activity.

This same style of mission, and/or a more enhanced version, could work in GTA 6. You can strike a deal with crooked cops to take out a rival drug dealer and in exchange, they'll leave your operation alone. Or you can choose to simply leave the police out of the equation and just ruthlessly crush anyone or anything that stands in your way.

Giving gamers more options to approach even GTA 6's side missions how they want could be one of the important details that make the series' next installment a game that defines the next-generation of gaming.

GTA 6 is reportedly in early development.

More like this
Gaming
November 24, 2022
You have less than a week to get the phenomenal precursor to Hades at a huge discount on PC
By Willa Rowe
Gaming
November 25, 2022
Nintendo needs to treat its older games with more respect
By Jon Irwin
Gaming
November 14, 2022
Call of Duty 2024 rumors are in the wild — here's everything we know
By Joseph Yaden
Related Tags
Share: