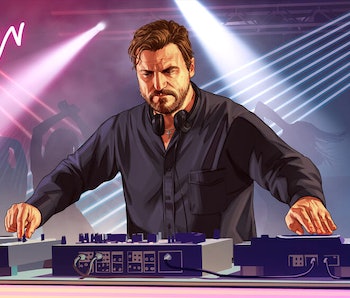 How can Rockstar possibly top GTA 5? Grand Theft Auto VI is rumored to be the most sprawling installment of Rockstar Games' crime adventure series yet. For over a year, chatter and alleged leaks have suggested the title will take place in Vice City and and handful of other South America and Caribbean-inspired locations.

Rockstar has yet to say a word about GTA 6, but the long-awaited follow up to GTA 5 is reportedly in early development. It's impossible to verify any of the circulating details, but if this globe-trotting future for the series turns out to be true, Rockstar need to steal one ground-breaking feature from Fortnite: live, in-game concerts.

Epic Games partnered with musician Travis Scott in April to host the Astronomical Fortnite concert. More than 12 million people tuned into the virtual show that transformed every lobby of the battle royale into a trippy light show and featured an enormous cartoon model of Scott zipping around the game's island. Rockstar is uniquely positioned to put together stellar in-game events that would make GTA 6 more lifelike than ever before and prolong the lifespan of its Online mode even longer than the current GTA Online.

Ever since the 2001 release of GTA 3, Rockstar has been trailblazing the way music plays a role in the franchise. The third installment of the series featured three-and-a-half hours of in-game radio material that was custom-made for the title. A year later Rockstar would license a sizable playlist of 1980s music to fit the theme of GTA Vice City.

Rockstar wen on to contract over 2,000 people to obtain the recording and publishing rights to its 214-song playlist in GTA 4. Finally, GTA 5 is quiet literally a living and breathing radio station that gets consistently updated with tracks from some of the world's most popular artists, like Megan Thee Stallion and ScHoolboy Q.

Rockstar already has the connections in place to license popular music and even record custom music for their games. GTA 5 already updates is music selection frequently, which means they could potentially line up a schedule of Travis Scott-like concerts across GTA 6's allegedly massive map. That would inspire users to log in to catch a virtual rendition of their favorite artists and in-game events.

GTA Online players have already been propping their own homegrown events, like the hysterical "Green vs. Purple" alien costume war. There's clearly a craving GTA world events and Rockstar could leverage its connections in the music industry to create an unmatched open-world experience.

GTA 6 is in early development.

More like this
Gaming
8.2.2022 5:27 PM
"Woke" GTA 6 is the best thing that could happen to the franchise
By Willa Rowe
Gaming
7.27.2022 8:00 PM
GTA 6 release date, locations, and rumors for Rockstar's next crime epic
By Christopher Groux and Robin Bea
Gaming
7.27.2022 5:20 PM
Grand Theft Auto 6’s female protagonist needs to be more than a stereotype
By Willa Rowe
Related Tags
Share: