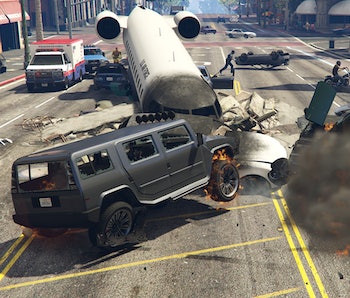 Grand Theft Auto V is nothing short of a demolition derby simulation. One of the missions in the crime adventure game's story forces players to blow up a freight boat to hijack a submarine. Half the fun in GTA Online involves ramming planes, helicopters, and cars into other players. Yet the buildings, streets, and trees of Los Santos remain unscathed despite players' destructive tendencies.

So the experience winds up being immersion-breaking and potentially dull over time.

Now, that GTA 6 is reportedly in early development by Rockstar Games, the next chapter needs to incorporate more environmental destruction caused by vehicles to truly take the franchise into the next generation of gaming.

Helicopters and planes should create craters in streets if they crash land, cars should be able to destroy storefronts if players drive into them, and buildings should begin to crumble if enough damage has been done to them. Adding details like this would make the series into a true urban sandbox where players can actually influence the environment around them with their bad decisions rather than causing wanton destruction without a care in the world.

The Battlefield franchise, which is a first-person shooter set during various major wars, has included destructible environments since the release of Battlefield: Bad Company in 2008. The Electronic Arts series has continued to iterate on the feature throughout the years. These days, gamers can slowly whittle down structures until they're nothing but ruins.

On the other hand, GTA 5 includes dramatic explosions for all of its vehicles but some of the game's hedges will completely stop cars if you drive into them. Many of the trees in Los Santos will also total a car without budging an inch, which players have been joking about since the release of the game in 2013.

Rockstar hasn't addressed any of these glaring physics snafus, but the lively PC modding community has been working towards making GTA 5 more realistic for years.

There are a handful of mods that have attempted to make collision physics more lifelike, but making Los Santos fully breakable is an undertaking that only Rockstar could pull off in a new title. One mod, Dynamic Plane Crashes, creates craters and rubble in the ground whenever a plane crashes. But editing all of the thousands of object GTA 5 to create a destructible Los Santos would take considerable amount of time and effort that no modder has yet to attempt.

While Rockstar has yet to announce that GTA 6 is in the works, reports have revealed that the company has begun initial work on the game that is expected to launch on next-gen consoles. Rockstar could leverage the souped-up hardware of the PlayStation 5 and Xbox Series X to make GTA 6 the demolition derby sandbox fans have been begging for.

GTA 6 is reportedly in early development.