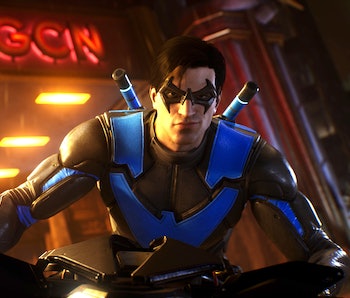 Batman is dead. The Dark Knight's various protogés have become the protectors of Gotham in his absence. That's the world that WB Montréal's latest game, Gotham Knights imagines. While it’s arriving a bit later than expected, it’s still set to deliver something much different than any Batman game before it.

Only time will tell if this game kicks off a new DC Superhero renaissance with Suicide Squad: Kill the Justice League. If you’re hyped for this game, check out everything we know about Gotham Knights.

When is the Gotham Knights release date?

Gotham Knights will be released in 2022. While the game was originally going to come out in 2021, Warner Bros. Montreal made the decision to delay it in March 2021.

“We are giving the game more time to deliver the best possible experience for players,” the tweet announcing the delay says. “Thank you to our amazing fans for your tremendous support of Gotham Knights. We look forward to sharing more of the game in the coming months.”

WB Montréal has not yet announced a specific season or month for that release next year. It isn’t the only WB game to be pushed back either; Hogwarts Legacy is also not launching until 2022.

What systems will Gotham Knights be available on?

Gotham Knights will be available for PC, PS4, Xbox One, PS5, and Xbox Series X when it launches. While it will arrive a couple of years into the lifespan of the next-gen consoles, we can still expect it to be on previous-gen systems.

Is there a trailer for Gotham Knights?

Yes! WB Released a trailer at DC FanDome that you can watch below. We have not gotten a new trailer since then, and we’ll probably have to wait even longer for a new one after this delay.

The trailer reveals quite a bit about the story's premise. Bruce announces himself as dead to his closest cohorts. It's unknown if this is from his perceived death in Arkham Knight, or from something else, like when Darkseid killed him in the comics. Rumors suggest this will be a soft reboot of the WB's Batman franchise.

After that, we get a close look at four playable characters: Red Hood, Nightwing, Batgirl, and Robin. Despite the hooded look, it's Tim Drake's Robin. Bruce Wayne's posthumous video mentions the Belfry, a fictional secondary hideout for the Bat-Family operated by Tim Drake and used by DC's fictional Gotham Knights.

This will possibly be used as a hub for players to choose missions and objectives in the final game. We also get a look at the Court of Owls, likely the villains this time around. The screen flashes with a single Talon (a Court of Owls elite) jump scaring towards the viewer.

What is the Gotham Knights story?

After Batman's death, Batgirl, Nightwing, Red Hood, and Robin must rise up as the protectors of Gotham City. Alas with Batman gone, an expansive, criminal underworld has swept through the streets of Gotham. From the trailer, it seems you'll have to stop the Court of Owls and possibly Mr. Freeze. The r3dakt3d teasers from the week of August 17 also imply Two-Face could be present.

The holiday photo that implicated the release date also hinted at Poison Ivy's presence in the game. There was a mention of Robinson Park, which is known as Poison Ivy's primary hideout. The mention could mean that Poison Ivy will be included in the rogue's gallery or it's just a little easter egg for fans.

It's also possible that Hush will be included as a villain. WB Montréal published a reading list for fans shortly after the game was announced that mentioned the villain's original storyline, implying his presence.

Robin is voiced by Sloan Mogan Siegel, known for portraying the title role in Dwight in Shining Armor.

Alfred is voiced by Gildart Jackson, known for narrating audiobooks.

Is there gameplay footage for Gotham Knights?

Yes! In addition to the Gotham Knights announcement trailer, we also got a full look at gameplay. You can watch it below.

From this, we can see that Gotham Knights will feature traversal using the bat-cycle. We can also see that the game will notify you when other players join. These are different costumes than in the announcement trailer, subtly confirming cosmetics will be available. We can also see levels on each character, confirming more RPG-esque elements.

In an IGN interview, it was confirmed that areas and foes won't be level gated. The entire city will be open from the start. Enemy levels will just be used to help you determine if you want to take on a foe, but being lower leveled won't bar you from achieving victory.

When Batgirl defeats foes, she acquires items that appear on the left. Perhaps this is our first look at a crafting system? It also appears there's some sort of gear system in play.

The overall game appears similar, but different enough from Rocksteady's Batman Arkham series. The freeflow system seems to be missing from this iteration of Batman.

Does Gotham Knights have multiplayer?

Yes! We see that there's co-op available in the gameplay trailer. In the middle of the gameplay, the upper right corner says "Robin joined the session."

You can play online with 1-2 players. Unfortunately, you can't run around with a posse of four, and split-screen is also unavailable.

How does Gotham Knights connect to previous Batman Arkham games?

Gotham Knights is not connected to the Batman: Arkham series. WB Montréal's latest title kicks off its own universe.

Gotham Knights will be released on consoles and PC in 2022.