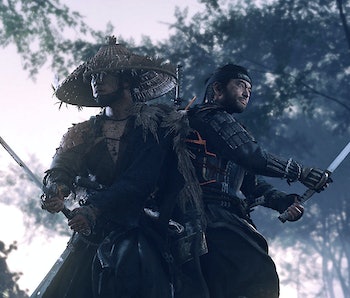 Before you begin Ghost of Tsushima's narrative, as you select a difficulty setting for the historical action-adventure, you'll also have to choose between four modes you've never seen in a game before: Standard, Subtitled, Samurai, and Kurosawa. What you select will determine the audiovisual flavor of the experience.

Here's a closer look at what each mode means so you can make the choice that's right for you.

In Ghost of Tsushima, you play as Jin Sakai, a lone samurai who adopts controversial tactics to defend his home from a Mongol invasion in the 13th century. These different settings can either make the experience more accessible or authentic, altering the visual filter or language accordingly.

What are Standard and Subtitled modes in Ghost of Tsushima?

On Standard mode, you'll play Ghost of Tsushima with English vocals dubbed by Daisuke Tsuji (Death Stranding, Brockmire) and Patrick Gallagher (Night at the Museum, Glee). It's worth noting that the character models seem to be synced to the English dub track.

Subtitled mode, like Standard mode, features an English dub track, with the only difference being English subtitles.

What is Samurai mode in Ghost of Tsushima?

Selecting Samurai mode means you'll enjoy Ghost of Tsushima with a Japanese audio track and English subtitles. As we mentioned previously, English is currently the only language fully synced to the lip flaps in Ghost of Tsushima, so there might be some visual dissonance for you in this mode. In other words, a character's mouth will almost never match up to the Japanese spoken dialogue, an ironic inversion of the dissonance from classic kung fu movies.

The Japanese audio more than makes up for this by featuring a killer cast.

Protagonist Jin Sakai is voiced by Kazuya Nakai, known for his roles as Roronoa Zoro in One Piece and Mugen in Samurai Champloo. This might be the mode for any weebs out there or simple gluttons for historical accuracy. It's not like the Japanese and Mongols uniformly spoke fluent English in 1274. In many ways, this feels like the definitive way to experience Ghost of Tsushima.

What is Kurosawa mode in Ghost of Tsushima?

Like Samurai mode, Kurosawa mode uses a Japanese audio track but distinguishes itself by adding a film grain effect with a black and white-ish filter to replicate the classic style of Japanese filmmaker Akira Kurosawa.

The filtered coloring was crafted by looking at 100s of old samurai films and with some light assistance from the Kurosawa estate, for accuracy. One of Ghost of Tsushima's co-directors, Jason Connell strived for accuracy in the mode, asking, "How deep were the blacks? How bright were the whites [in Kurosawa's work]?" Connell noted other changes made to further emulate Kurosawa, like amping up the wind and adjusting the sound design. "Our audio team have an internal tool that mimicked sounds of old TV and, specifically, megaphones, radios, TVs back to the '50s," Connell said.

Will any of these modes change gameplay?

Outside of the effects mentioned in each section, there aren't any discernable changes from mode to mode. Swordplay, difficulty, and everything else remain the same no matter if you choose Samurai mode or Standard.

Can I change my choice later?

You will never see the options packaged as Standard, Subtitled, Samurai, Kurosawa again, but you can manually change your audio language, subtitles, and visual display options at will via the game's menu.

By going to the options menu and clicking "accessibility," you can toggle the set spoken language and subtitles. And the Kurosawa filter setting is available in the "display" setting.

Ultimately, your initial choice doesn't matter, but picking the right option from the get-go will make your life easier. Who wants to spend hours fiddling with 18 different options when you can get it right from the start?

Not a legendary samurai of Tsushima, that's who.

Ghost of Tsushima is currently available for PS4.