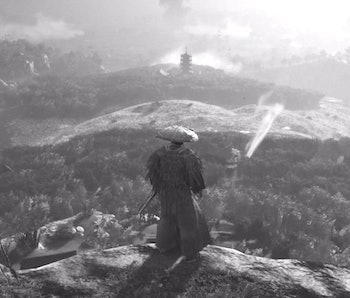 Sucker Punch Productions gave PlayStation 4 gamers their first look at gameplay for Ghost of Tsushima during a PlayStation State of Play livestream on May 14. The upcoming samurai adventure will feature everything from twitchy Dark Souls-esque combat, adorable foxes that guide you to fast-travel checkpoints, and a flurry of customization options that will even let you experience the game's stunning world in Criterion Collection-worthy black and white.

While other recent AAA titles like The Last of Us Part 2 prioritize photorealism Ghost of Tsushima will let gamers slap a black and white filter over its vibrant and meticulously designed environments for sheer nostalgic fan service, and we’re here for it.

“We wanted to create a way for you to feel like you’re playing your favorite samurai movie,” said Fox. “So we created a windy, black and white, film grained out mode that you can turn on from the very beginning.”

The filter will take everything from standard gameplay to cinematics and transform them into scenes straight out of Seven Samurai. To add to its old-school aesthetic, Ghost of Tsushima comes with a Japanese voice track with English subtitles that can be toggled on at the start of the game, much like Sekiro: Shadow Dies Twice.

Players will also have the ability to enter into Photo Mode. This will pause the game and let gamers take dramatic photos of the main character Jin Sakai as he rides a horse across fields of waving pampas grass or stands face-to-face with a Mongol warlord, ready to draw his katana.

The Inverse Analysis — While Ghost of Tsushima’s cinematic black and white mode is the perfect ode to the samurai movies that so clearly inspired the game, Sucker Punch didn’t specify if players will be able to turn it off if they want to play in color for a few hours.

After all, the world of Ghost of Tsushima looks absolutely gorgeous and begs to be explored in full color. I’d love to face off against an enemy swordsman in black and white to feel like I’m in a Kurosawa film, but not when I’m roaming around looking for a specific color of flower to dye my clothing.