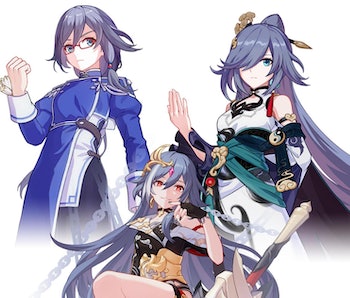 Another Genshin Impact character seems to have leaked before developer miHoYo could officially announce the new addition to the roster.

A datamined cutscene shared on YouTube on September 9 seems to reveal footage of Yelan, a new character from Liyue who has a connection to Fu Hua from miHoYo’s other game, Honkai Impact. Her intriguing design — along with the juicy rumors surrounding her links to some familiar faces from the main Genshin story — already has us counting our Primogems in anticipation.

Here’s everything we know about Yelan in Genshin Impact.

When is the Yelan release date in Genshin Impact?

MiHoYo has not yet confirmed this character will join the game at any point, so we don’t yet have a concrete release date for her. That said, based on previous leaks, we can make some educated estimates.

If Yelan is a five-star character, she’ll arrive at the earliest with Version 2.4, which comes on January 5, 2021 (assuming miHoYo keeps to their schedule of updating the game every 42 days).

What are the Yelan Genshin Impact leaks?

There have only been two concrete leaks relating to Yelan so far. The first occurred in July 2021 when the dataminer Dimbreath found her name in the code. In September 2021, Yelan was identified by the leaker UBatcha as a background character in a datamined cutscene. She’s wielding a polearm in the cutscene.

Is Yelan in Genshin Impact related to Fu Hua from Honkai Impact?

Upon Yelan’s debut in the leaked video, certain players drew visual comparisons between her and a popular character from Honkai Impact named Fu Hua. Currently, it’s unknown if Yelan is related to Fu Hua in any capacity or if miHoYo drew from the Genshin Impact sister game to design Yelan.

We currently only have the above image to reference Yelan’s design, but it’s unlikely that the similarities between Fu Hua and Yelan will be present in the 3D model.

Archons and Herreschers are among the most powerful forces in Genshin and Honkai, respectively. While this connection is small, it has been used to theorize the future of both series.

Unless Yelan is planned to have a large role in the future of Genshin Impact, giving them a visual connection to Fu Hua would undermine things previously established in the relationship between Genshin and Honkai. It’s likely just a coincidence they look similar in this specific shot.

What role will Yelan play in the Genshin Impact story?

We don’t yet know how Yelan will fit into the Genshin Impact story, but there are some theories out there.

One theory is that Yelan is a younger Madame Ping. This is based primarily on that Yelan seems to be holding the Cleansing Bell.

Another theory suggests Yelan is the human form of the Adeptus known as Cloud Retainer. If the video is to be trusted, Cloud Retainer has a color scheme similar to Yelan’s.

Cloud Retainer was allegedly previously planned to become a playable character named Shenli, who was revealed in a datamine. Yelan could be miHoYo’s second attempt at designing the character. We previously saw miHoYo perform major redesigns on character with Mimi, who is believed to have become the Inazuma character, Kokomi.