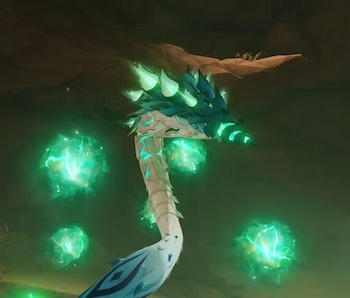 Genshin Impact 3.4 brought a new boss. The Setekh Wenut, which leakers once called the “Sandworm,” can now be found in the Wenut Tunnels of Sumeru. It’s an especially important part of farming for the latest Dendro 5-star character Alhaitham and other Sumeru characters in the future. However, players are having trouble finding it and, in some cases, actually fighting it. Here’s where to find the Wenut Tunnels and defeat the Setekh Wenut for those sweet, sweet drops.

How to find the Wenut Tunnels in Genshin Impact

The Wenut Tunnels are in the northwestern region of Sumeru above the Eye of Sands. The surrounding areas include the Passage of Ghouls, The Sands of Al-Azif, and Qusayr Al-Inkhida’. You can unlock the full portion of the map with the Statue of Seven in the Tanit Camps.

The Wenut Tunnels don’t need any particular quests to unlock them, so you can start adventuring in them right away. After you reach the aforementioned Statue of Seven, the map marks where to find the Setekh Wenut with a little icon of its face. If you head toward that area, you will see a hole that you could directly jump into to fight it.

The Wenut Tunnels have more than one entrance. Many of them pop up along the light brown lines that branch across the desert map. However, we advise going with the entrance nearby the teleportation waypoint just below the Setekh Wenut icon. It’s especially convenient because it’s nearby a cliff that drops straight to where the boss is.

You can only fight the Seketh Wenut in a set location: the place marked with its icon on the map. There’s a green aura marking the floor where the boss fight can take place. The Setekh Wenut should emerge with a proper HP bar when a character drops to the bottom of the tunnel from above or enters the center of the room where it's waiting.

The Setekh Wenut can beef with your characters even outside of its home, but you can’t actually fight it anywhere else besides its specific boss location. It appears as a green dust aura in the sand in a few areas around the tunnels, and it will eventually attack the active character if they stand still for too long. Thankfully, a circular highlight appears before it attacks, so you can avoid it pretty easily.

Some of the confusion about how to beat the Setekh Wenut might be because it pokes its head out long enough to attack it. You can’t actually hurt it, though. Thankfully, fighting the Setekh Wenut in its set location is fairly straightforward. It burrows in and out of the sand similar to the Ruin Serpent in Liyue.

Attack it while it’s out to whittle down its health as much as possible. It constantly drills through the area as it attacks, so a healer or shield character will come in handy for keeping your health up. It also occasionally attacks with a laser beam-like Anemo blast and with green Anemo missiles that hone in on the active characters. A character with a time-dependent burst like Eula and Cyno isn’t ideal because of how often the Setekh Wenut dives into the sand, but you can still defeat it pretty easily with one.

After some time, the Setekh Wenut will summon Anemo orbs that you need to disperse to damage it. It’s similar to how elemental orbs with the Electro and Anemo Hypostasis, meaning your team has to have characters that react with Anemo. Use characters with long-ranged attacks or bow characters to disperse these bubbles. Keep in mind that their element needs to react with Anemo, so they need to be one of the following: Cryo, Pyro, Electro, or Hydro.

The Setekh Wenut will respawn after a few minutes like other non-weekly bosses. Happy hunting!