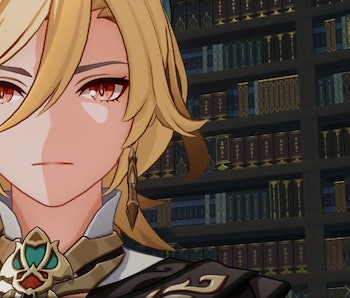 Genshin Impact has no shortage of attractive anime characters to gawk at, and the latest we’ve gotten a peek at is named Kaveh. The name of this Sumeru architect surfaced in leaks as far back as Genshin Impact 3.0, but those leaks only had detailed descriptions of his design and no actual images. Thanks to the latest leaks, fans can finally put a face to the amusing anecdotes Sumeru characters have about him. Most of this is still early information, some of which might be subject to change before his launch. Here’s everything we know so far about Kaveh in Genshin Impact.

When will Kaveh come to Genshin Impact?

There isn’t any information on when Kaveh will be coming to the game. He hasn’t even made an appearance in the story yet. It could be a similar situation to Shikanoin Heizou, where multiple characters were talking about him enough that it was rumored he would release soon after his mention, but he actually was added to the game much closer to the end of the Genshin Impact 2.0 era.

What are Kaveh’s abilities?

Kaveh is rumored to be a Dendro Claymore user based on the latest leaks from the Wangsheng Funeral Parlor Discord. It’s still unclear if he’s a 4- or 5-star. His abilities like passives, Elemental Skill, Elemental Burst, and constellations are also still a mystery.

What is Kaveh’s backstory?

Kaveh is the famous Sumeru architect who built the Palace of Alcazarzaray. It’s considered to be his magnum opus. However, as per Tighnari, he somehow accumulated a lot of debt from the project and now needs to live with Alhaitham to save money. He apparently doesn’t enjoy living with Alhaitham and rants about his roommate to anyone who will listen.

Kaveh is portrayed as a passionate, perfectionistic individual whose conviction to his principles sometimes costs him too much. He’s also relatively hotheaded based on the voice lines from his friends. It’s unclear what role Kaveh will play in the story itself, but he does have multiple connections with existing characters like Tighnari, Cyno, and Dori.

Oh, and the Genshin Impact fandom has also decided that he and Alhaitham are boyfriends and that Kaveh looks strikingly similar to Howl from Howl’s Moving Castle. Do with that what you will.

What do other characters say about Kaveh?

Here’s what other playable characters have said about Kaveh through voice lines.