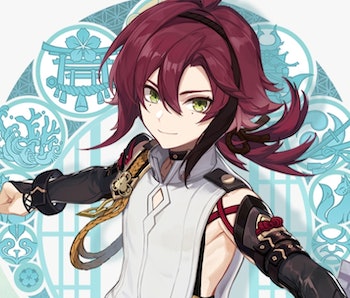 Heizou has arrived at the scene. Leakers have been collecting information on his kit and role in the story for months, so it’s a relief to finally put a face to the name. The Tenryou Commission’s number one detective has been on leaker’s radars since before Genshin Impact 2.6. However, HoYoverse only introduced him recently amidst the Genshin Impact 2.7 delay. Here’s what we know so far about the latest Genshin Impact Anemo addition, Shikanoin Heizou.

When will Heizou come to Genshin Impact?

Heizou might come as early as Genshin Impact version 2.8 and fans have known about Heizou’s existence for months. We can expect his arrival in the “next update,” as many other characters have shown up in updates following their initial character reveals on social media. However, he likely won’t be Genshin Impact 2.7 because of the weird timing with the delay.

What are Heizou’s skills and abilities?

The Genshin Impact 2.8 livestream confirmed most of Heizou’s skills and abilities. He’s an Anemo character like Kazuha, Venti, and Xiao, and the first male catalyst user. Most catalysts apply long-range elemental damage like a mage, but Heizou uses martial arts as part of his fighting style. Some fans even refer to him as a “melee catalyst” user.

These are the talents, passives, and other abilities that the community currently expects from the Inazuman detective.

A unique technique that gathers Anemo in one place before unleashing it all in one kick. Is always there in a pinch to land on some criminal’s fleeing back.

Dimbreath’s original tweet about Heizou’s passives is still visible in the Wangsheng Funeral Parlor Discord. However, this same information has also been transferred to Honey Hunter and other Genshin Impact Wikis. Some of these passives are probably level-locked like with other characters.

Heizou’s constellations haven’t been confirmed via an official outlet. However, here’s the most recent data (including leaks) as per Honey Hunter:

What do I need to farm for Heizou?

Thanks to leaks, Heizou’s ascension and talent materials are already circulating the web. Materials can change but these relatively reliable leaks are based on the recent past. If you’re conflicted about believing the leaks, at least farm for Vayuda Turquoise Slivers, Shards, and the like. These are applicable for ascending any Anemo character. Beating up a bunch of Treasure Hunters isn’t a bad idea either, considering how many characters need their emblems.

What role does Heizou play in the story?

Not only does he possess a wild imagination, but he also has a mind for meticulous logic and reasoning, as well as an extraordinary sense of intuition when it comes to solving cases. Whenever a crime occurs, his colleagues rely on experience to help them with handling the case, but Heizou brings in an out-of-the-box perspective and gets straight to the crux of the case.

He’s known as a lively, cheerful character that’s a bit unorthodox in his methods. His unruly nature clashes with Sara’s more organized and rule-abiding one and confuses the other Inazuman characters. However, as flashy as he may seem, he’s not about the fame. As per the Genshin Impact 2.8 livestream, “To Heizou, you only become a true detective when your reputation is strong enough to make a person think twice before committing a crime for fear of getting caught.”

If you want to join Heizou as a detective for the day, you can do so during his Hangout Event series coming in the 2.8 update.

What do other Genshin Impact characters say about Heizou?

A couple of playable characters, including Thoma, Kamisato Ayaka, Gorou, Sangonomiya Kokomi, Kuki Shinobu, and Kujou Sara, have voice lines about Heizou. All of them seem to either be confused by his behavior or principles that work outside the boundaries of the law.

Kano Nana, Heizou’s distant cousin and Narukami Shrine maiden, thinks Heizou ought to get a promotion for his work and worries about him getting into trouble. She also occasionally takes care of Sayu, who she says can sometimes be a bigger headache than Heizou.