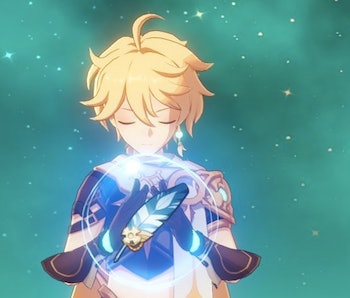 When you begin the free-to-play RPG, Genshin Impact, you're shown a flurry of stats that lead you to believe they're all equally important. They're not.

If you want to succeed in Genshin Impact, there's just one single stat you must bolster to the maximum: attack. Optimizing your attack stat can allow just one character to carry your entire team, beating bosses and clearing domains with ease. To boost the attack stat quickly, focus your efforts on improving your character's artifacts, and prioritizing items that boost attack. Here's how it works.

How do artifacts work?

You can find artifacts throughout the world as random drops from bosses, rewards from missions, and in chests.

There are five artifact slots available on every character. Each slot needs to be filled with an artifact that corresponds with the slot. Artifacts are similar to armor in other RPGs, and characters who wear multiple artifacts from the same set will receive minor stat bonuses in addition to the normal stats provided.

Most artifacts have randomized stats, so if you pick up a duplicate it might not boost the same stats as your original. However, every feather artifact you pick up will boost your attack, making it the most important artifact to level up on every character. A character with a level 16, four-star feather and nothing else will absolutely demolish another character wearing a matching set with smaller, evenly distributed upgrades.

Why is the attack stat important?

Genshin Impact rewards aggression. If you put your full force into destroying an object or defeating a foe, Genshin Impact will reward your clear dominance. A stronger attack means you slash through foes with ease, destroying any damage sources quickly. In turn, a higher attack means that you take less damage. A high attack also means you can quickly mine Ore. Focus on increasing your attack so you can get through Genshin Impact's tasks with greater ease.

How do you improve your attack with artifacts?

You can do this in two ways. Firstly, focus on your feather artifact. Doing so will help you increase your attack rather quickly and it doesn't have the same caps as your weapon such as ascension. You can also look out for artifact sets that contain attack boosting bonuses. For example, the set Resolution of Sojourner adds 18 percent attack when you equip two or more artifacts from the set.

When choosing artifacts for the other four slots, like cup and flower, make sure to find ones that prioritize the attack stat as well. Anything else should be upgrade fodder. While stats like defense and elemental mastery seem awfully important, investing in them doesn't offer dramatic power gains anything close to attack.

YouTuber Mtashed has put out a number of helpful videos in recent weeks explaining how stats and artifacts work in Genshin Impact. If you're looking for more detail on these points, his channel's worth a look.

If you're looking to increase your attack damage via a set bonus, make sure to keep your eyes peeled for these five sets.