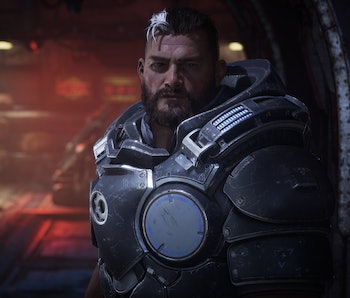 With Gears Tactics, the Gears franchise is branching out of the third-person sci-fi shooter genre and into the realm of turn-based strategy games trailblazed by titles like XCOM.

Anyone interested in the franchise's foray into new territory when it is released will need to know when, where, and how to play Gears Tactics at.

When is the Gears Tactics release date?

Gears Tactics will be released on April 28, but it will only be available on the PC via both the Windows 10 Store and Steam. A specific launch time hasn't been shared, but if it isn't available at midnight, you can expect it to be on Steam by 1 p.m. Eastern.

Unlike most Microsoft-published games, Gears Tactics is a PC exclusive title at launch. Microsoft has confirmed that an Xbox One version of the game is in the works and will be released later in 2020. Thankfully, it isn't just limited to the Windows 10 store like many Microsoft titles.

When is the Gears Tactics pre-load available?

As of this writing, anyone can already pre-load Gears Tactics. The download size is about 45 GB, so you will want to give yourself ample time to download it before launch. Microsoft opened up pre-loads for the upcoming title on April 13. All you need to do in order to pre-load Gears Tactics is either pre-order it on the Windows 10 store or pre-load it from the Xbox Game Pass for PC hub.

Gears Tactics is a first-party Microsoft title, so it's free on Game Pass from launch. If you don't want to drop a full $59.99 for this experiment Gears game, especially when XCOM: Chimera Squad is so much cheaper, Xbox Game Pass for PC gives you a less costly alternative.

Can my PC run Gears Tactics?

If you're interested in Gears Tactics, you're also wondering whether or not your PC can even run the game as strategy games can sometimes be demanding on hardware. Microsoft has shared the specs for Gears Tactics, so you can get a better idea of how your PC will handle the game. Steam lists the following as the minimum specs required to run the game well:

Older PCs and laptops may struggle to run Gears Tactics, but if your computer is somewhat new, you should be able to run the game just fine. If you want to push the graphics to their limits with 4K and HDR, Microsoft recommends the following specs on Steam:

Once again, most modern PCs should fit this bill, but this is something that's always worth looking over before buying a new PC game.

Does Gears Tactics have a pre-order bonus?

If you've convinced yourself to pick up Gears Tactics, you'll want to know if you get any bonuses for buying or playing it early. Anyone who pre-orders Gears Tactics or plays on Xbox Game Pass for PC before May 4, 2020, will receive the Thrashball Cole Character Pack. This DLC adds Augustus Cole, a classic Gears character, to your team with some special rare gear. It's a nice little bonus for the die-hard Gears fans that decide to support the game early.

Hopefully, this gave you a better idea of when, where, and how to pre-order and pre-load Microsoft's next game. Check back on Inverse next week to see our forthcoming review and other coverage for Gears Tactics.