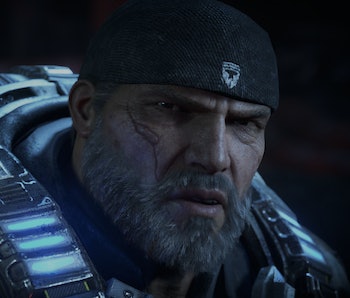 When Marcus Fenix made his return during a Gears of War 4 demo back in July, many players immediately started calling out the fact that he was probably going to die during the campaign protecting his son, the new protagonist. It’s a tried-and-true tactic that gives the heroes we know and love a reason to die, but it never truly provides the closure an audience deserves. That said? Gears of War 4 actually handles Fenix’s return perfectly.

This sort of narrative moment always focuses on passing the torch down from father to son, mother to daughter, robot pilot to robot pilot, or even Jedi to Jedi — more importantly though, it isn’t anything new. It’s also something that many video game franchises seem to be doing these days. World of Warcraft passed numerous mantles down in Legion, Halo 5 attempted to pass down the mantle of the legendary Master Chief, and now Gears of War is attempting to pass it on to Marcus’s son: JD Fenix.

I had a pretty good idea of what to expect when I first booted up Gears of War 4’s campaign. I knew the infamous Lancer and Chainsaw Bayonet would be re-introduced; I knew that I would be moving from cover to cover, shooting thousands of bullets; and I knew that Marcus Fenix would be passing down the hero’s mantle to JD at some point during the game’s narrative. While the first two moments on my list were certainly included in the narrative, I was pleasantly surprised with how the Coalition handled the third.

In Gears of War 4, Marcus Fenix has settled down following the end of the war with the Locust. In the last 25 years he’s managed to build a life of peace away from conflict, start a family with Anya, and work to raise the game’s new protagonist JD. But after losing Anya and sending JD away to boarding school, he’s become a grumbling old man focused on rebuilding Anya’s family estate while living a life of solitude away from the rest of the world.

When players first meet up with the now-older Marcus Fenix during Act 2, he’s reluctant to join JD, Kait, and Del on their quest to flee the reformed Coalition of Ordered Governments and pursue the Swarm. Naturally, his fatherly instincts kicks in, and, despite knowing that it isn’t the right call, he joins his son and arms them to the teeth with old armor and weaponry.

Throughout their entire reunion, the old Fenix is continuously in conflict with the new Fenix as he and JD bicker about things like the COG forces destroying just about everything on his property. Not only does Marcus keep his stubborn attitude when questioned by JD, but he does so in a classic “dad” manner. In a way, the game paints him as the dad of the new franchise with him consistently suggesting ideas that are often ignored by JD and friends — even though his ideas end up being the right calls for most of the campaign.

But then, during the beginning of Act 3, Marcus gets grabbed by a new type of enemy, the Snatcher, and dragged down into the Locust burial site. Immediately, I thought he was going to die. After trudging through the mines and finding him in a pod, I once again figured that was the end of Marcus Fenix. Boy was I wrong.

Just when you think all hope is lost, Marcus coughs up some fluid and stands back up to continue the fight. It’s a bit more complicated than that, but, well, you can watch for yourself if you like:

Honestly? I was floored that they decided to keep Marcus alive. So much so that I was expecting him to die any number of times throughout the remainder of the campaign. Whenever he coughed up some Swarm goop, when his helicopter goes down … but I’m happy to report that — surprise! — Marcus Fenix actually makes it through the entirety of Gears of War 4’s campaign.

Regardless of how I feel about the overall campaign, I can’t help but appreciate how the Coalition handled the return of Marcus Fenix. Instead of taking the easy route and cutting him out of the picture entirely, like was expected, the team turned around and made sure that we knew Marcus and his old crew of friends were going to be valuable pieces of the franchise going forward.