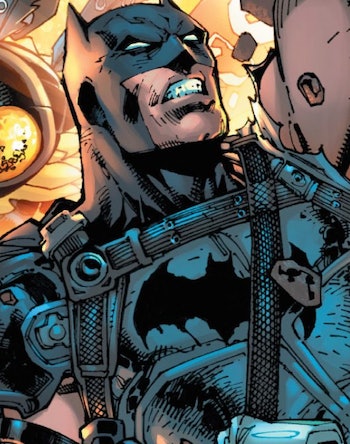 Batman/Fortnite: Zero Point issue #3 makes its way to comic shops on May 18, setting up one of the most historic crossover clashes the Caped Crusader has ever seen.

Leading up to the launch of Bruce Wayne’s epic fight with Snake Eyes from G.I. JOE, Inverse spoke with series writer Christos Gage and illustrator Reilly Brown to reveal how it feels to fulfill a dream 40 years in the making — and how it deepens some of the Fortnite island’s biggest secrets.

As those who’ve been following the six-issue arc may know, Batman/Fortnite: Zero Point chronicles the DC hero’s journey inside a mysterious Rift that appears in Gotham City. After he passes through to the Fortnite island, Batman loses his memory and is attacked by a curious cast of characters.

It’s raw emotion, however, that compels Batman toward a likely partnership with Catwoman. The pair slowly realizes the nature of their predicament: A massive storm gradually overtakes the island over the course of 22 minutes. Those who perish in the chaos are doomed to repeat the loop with a wiped memory once more, while the lone survivor escapes. It exposes the rich lore behind every single match of Fortnite.

It’s this Memento-esque scenario that first drew Gage to the project.

“This is the ultimate challenge for the world's greatest detective,” Gage tells Inverse. “If he can't remember things past 22 minutes, how can he deduce anything? So I think it challenged me as a writer to think about ways for him to do that — and it challenges the character.”

On the page, Batman’s latest challenge is Snake Eyes, a hero who’s been gracing G.I. JOE lore since 1982. In the story of Batman/Fortnite, he’s brought to the Island by a mysterious group called the Imagined Order in an effort to stop Wayne from claiming Victory Royale and regaining his memory. As Gage describes, the ongoing feud permanently changes Batman’s character. His goal was “to make Batman a little bit more of an enigmatic figure” and “almost scary.”

“If you're going up against Batman and trying to foil Batman, what's it like?” Gage muses. For Gage and Brown alike, answering that question through the Snake Eyes fight became a deeply personal journey.

“We get this fight that I've personally been wanting to see since the ‘80s,” Gage says. “I remember being a kid and going into a toy store and finding the giant, Treasury-edition-sized Batman versus Hulk comic and just being blown away. I hope that what we've done will make somebody feel that way today. And it's also a little bit of a love letter to ‘80s action movies. I feel like Johnny Lawrence on Cobra Kai would enjoy this comic.”

Above all, Gage strove to make the fight interesting for fans of all parties involved. “I wanted to give fans of each character moments of their favorite character being totally badass, which hopefully we got,” he says. “Part of the fun of having a loop where things reboot every 22 minutes is that that can happen without ending the fight.”

Brown echoed this sentiment of retro appreciation, saying that drawing the altercation between these two beloved characters was like dipping back into his childhood toy box. He used a Snake Eyes figurine for reference and inspiration. “It really was just me playing with two toys and then drawing the adventures on the page,” he says “It was a lot of fun, and it really did bring me back to the ‘80s and feeling like a kid again.”

Beyond forcing these two unlikely franchises to collide, it also fell on Brown to illustrate a unique visual transition for Batman that pushed beyond the character’s storied history. “To keep it looking Batman but still Fortnite, one of the things we were thinking about was to make it look like a kitbash type thing, Brown says, “like Batman is assembling his costume off pieces of other Fortnite characters, costumes, or things that look similar because we want to show that he's been in the loop for a long time and replacing one piece of armor at a time.

So, as seen in the picture below, Batman’s suit is tattered but outfitted with a belt full of weapons from Epic Games’ evolving Battle Royale universe.

Layered under these franchise-blurring visuals, Gage promises the series will continue to dive deeper into the secrets of Fortnite lore. Up until now, many Battle Royale fans probably haven’t yet heard of the 22-minute loop or its amnesia effects, but the writer teases that’s just the tip of the iceberg.

“It is way more complex than I think anyone really imagines,” Gage says. “I was like, ‘Are you serious that we can reveal this secret and that secret in the comic book? You're not saving this for the game?’ And Donald [Mustard’s] answer was no.” And this is only the beginning.

“We're going to start coming at you hard and fast with the lore,” Gage says, “with the characters finding things out that have never been revealed before and expanding upon things fans have been speculating about at the center of the game.”

Despite using the lure of new information, it’s no secret, however, that die-hard comic book fans may see a brand crossover between DC and Fortnite as a gimmick in itself. If that’s the case, Gage hopes the results amount to an enjoyable gimmick nonetheless. “Is Batman fighting Snake Eyes a gimmick? Depends how you define gimmick,” he asserts. “Is it crucial to the story? Probably not.”

Brown, on the other hand, sees Batman/Fortnite: Zero Point as a chance to look past tired comic enthusiasts and toward a new generation of readers. “There's going to be a lot of people who, in 10 years, they're going to say this was the first comic book,” he says. “They’ll say they went into the comic book store just to pick up Fortnite and all of a sudden they were also buying Superman and Teen Titans.”

No matter who reads it, Gage hopes his fans have a good time. “Could we have done it without Batman fighting Snake Eyes? Probably. Would it have been as much fun? Hell no,” he says with authority.