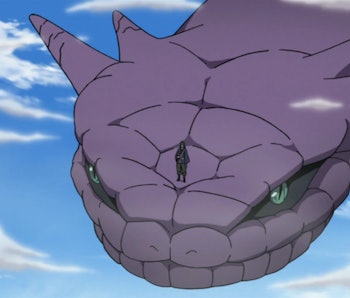 The latest Fortnite collaboration features characters from the Naruto franchise, with skins, emotes, weapon wraps, and more. One of the most sought-after items is the Manda Glider, which can be earned for free by completing the new Nindo Challenges. Here’s what you need to know about the new Fortnite Naruto crossover.

How to begin the Fortnite Naruto Nindo challenges

First, you’ll need to log into the Fortnite Naruto crossover event page using your Epic Games credentials. Once you’re logged in, you’ll be able to pick a path from one of the four characters, with tasks assigned to each.

You aren’t restricted to one character, though. Each one can be overlapped and completed.

How to get the Fortnite Manda Glider

You can check your stats on the Fortnite X Naruto crossover page, but keep in mind, it may take up to an hour to reflect on the site itself.

To earn the Manda Glider, you need to complete all four character paths. By the end, you will have eliminated 180 players, reached the top-six spot 50 times, survived 240 storm phases, and caught 200 fish.

Alternatively, you can purchase this item as part of a bundle from the item shop starting on Thursday, June 23rd at 8 p.m. Eastern.

When does the Fortnite Naruto Nindo crossover event end?

This will take you a considerable amount of time, but luckily, the challenges will be available for the next two weeks. Specifically, you have until Thursday, July 7, 2022, at noon Eastern to wrap up your challenges, which should give you plenty of time to get through them.

What are the Fortnite Naruto Rivals character skins and cosmetics?

The Akatsuki Wrap and the Manda Glider will both be purchasable from the item shop on June 23, at 8 p.m. Eastern, along with plenty of other cosmetics such as character skins (and alternative outfits), back blings, pickaxes, and emotes.

These are the Naruto cosmetics that will be added to the item shop this week:

The Itachi & Orochimaru Bundle will give players access to the Islandbound Ninja Loading Screen, as well as the Itachi Uchiha Outfit, Black Ops Mask, and Orochimaru Outfit.

More like this
Gaming
6.15.2022 4:43 PM
Where to find the Grapple Glove in Fortnite and how to use it
By Joseph Yaden
Gaming
2 hours ago
All Expedition answers for Fire Emblem Warriors: Three Hopes
By Hayes Madsen
Gaming
6.27.2022 7:37 PM
6 spicy cheat codes to help your Vampire Survivors adventure
By Willa Rowe
Related Tags
Share: