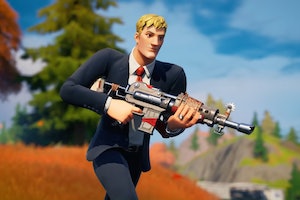 Weekly challenges are a Fortnite staple, though some of them arrived on Tuesday instead of the usual Thursday. While Epic Games did clarify on Twitter that this was a mistake, this week’s challenges are still live in-game and you have until next Thursday to beat them. You’ll be thankful for the extra time with this challenge too!

After completing a challenge asking players to ride zip lines, players are then tasked with finding at least four Literature Samples around the map.

There are five known samples to collect across three named locations: Lazy Lake, Pleasant Park, and Retail Row. So this can be quite a time-consuming challenge if you don’t know where to look. But that’s why we’re here.

The first Literature Sample at Lazy Lake is in the building right next to the pool. If you go into the basement garage and walk over to the stairwell, you’ll see a bookshelf with a sign that says “Lazy Lake Spa” right above it. Interact with it and you should collect the sample.

As we mentioned, each location actually has two Literature Samples in it. For the second one, you’ll want to go to the gas station in Lazy Lake. Near the entrance, you will find a magazine stand that you can interact with.

Doing so will get you the literature sample. From here, you can either go to the other locations to find the next samples or just finish this match and continue in the next round you play.

In Pleasant Park, the Literature Samples are found in random houses. The grey home on the southwestern end of Pleasent Park contains the sample in a small bookshelf that’s not fully stocked on the first floor.

The second Literature Sample can be found in the brick house at the northwestern end of Pleasant Park. Enter the house and go through the first door on your left. Interacting with that bookshelf will get you the next Literature Sample that you need.

While you can certainly get the samples from multiple areas during one match, it may be faster to immediately drop into each area across three games.

The Literature Samples on Retail Row make the most sense as they are actually in a bookstore. Go into McGuffin’s bookstore at retail row and walk up to the two magazine stands next to the staircase in the back of the store.

Like with the other samples, interacting with this will net you the required Literature Sample and you’ll finally complete the challenge if you hadn’t done so already. You’ll be rewarded with 24,000 XP for completing it, so it’s definitely worth checking out if you want to level up.

Just make sure you’ve unlocked this challenge first, as the bookshelves won’t appear at these locations until that challenge is active.

Fortnite is available now across all major platforms

More like this
Gaming
2 hours ago
Where to find Dragon Ball Capsule Corp locations in Fortnite
By Joseph Yaden
Gaming
39 minutes ago
7 best Cult of the Lamb tarot cards to pick on your next run
By Jess Reyes
Gaming
8.9.2022 9:18 PM
Did you know Netflix has games? Here's how to find them
By Robin Bea
Related Tags
Share: