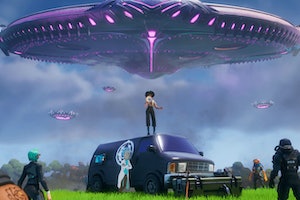 Fortnite Season 7 is nearing its end, as a new countdown timer appeared in-game on the morning of July 25.

Should the current timer continue unchanged, it appears Epic has a live event set to occur on August 6, 2021 at 6 p.m. Eastern. But what does it all mean? What’s the climax of this ongoing alien invasion from this season?

Here’s a look at five possible theories that could explain what bombastic event will occur when the countdown timer expires.

5. Superman will debut — We’ve entered Week 8 of Season 7, and we still have no clue how Superman factors into the story this season. However, there’s a skin that should become available as part of the latest Battle Pass starting August 12.

It’d be very appropriate for DC’s iconic superhero to show his face during a live event. As the aliens lay siege to the Fortnite Island, will it be Superman who arrives in the nick of time to hold back the attackers before the map is destroyed? It seems likely the aliens will do plenty of damage to certain POIs, but maybe Superman will show up to make sure nefarious foes don’t take over the entire landmass?

4. A major battle happens, and we all lose — Those who’ve been following Fornite Season 7 lore closely may know that much of the latest Battle Pass has featured an ongoing war between the Imagined Order and the aliens. The IO is responsible for keeping the Island’s residents trapped in their respective time loops, so they’ve been setting up for a conflict against any otherworldly neighbors who could potentially disrupt that. Again, you can see the evidence from the massive cannon sitting atop Corny Complex.

The Season 7 live event may feature the battle between these two opposing sides in a way that damages multiple locations on the map. Moreover, how might the Seven figure into this fight? The start of Season 7 focused a lot on the Foundation and his place in the assembled group, but which side will the Seven fight for? There are many factions in the Fortnite universe right now, and the Season 7 event may illustrate what happens when they all collide.

3. Time gets broken again — Fortnite lore is all about messing around with the fabric of time, so it’s not unthinkable to assume the aliens might manipulate the past once more during their invasion.

Could they open up a portal to bring back some of the older plot threads we thought Epic had abandoned? CommunicGaming recently propagated this idea on YouTube, pointing out a bizarre phenomenon about the Week 7 Legendary Quest hatcheries. View the structures in Replay Mode, and you’ll see the eggs left by the Polar Peak monster that have dogged Fortnite theorists since they first appeared in 2019.

If these eggs are really inside the hatcheries, might these monsters be leveraged by the IO or aliens to gain the upper hand? If that happens, there’s no limit to the plot threads Epic may seek to exploit for this presumed event.

2. The Cube returns — In that same vein, there’s been lots of chatter about Kevin the Cube potentially making a comeback at the end of Season 7. Originating from a post on the FortniteLeaks subreddit in mid-July, an unnamed leaker suggests “the Cube will return at the end of Season 7, controlled by an unknown queen character that will play a part in Chapter 3.”

We’re not sure if we believe this leak, but the concept does make sense. Not only is Kevin a fixture of the Fortnite community, but he’s also played a big role in multiple live events over the years. Given this history, it seems par for the course that he could be leveraged by a member of the Seven to stop the alien invasion. Unfortunately, Kevin is a cube of unknown power, so it’s impossible to predict how he could be used in the seasons ahead.

1. A concert — That same leak also suggests an Ariana Grande concert might be in the works, so it’s possible that the countdown timer could be used to let potential viewers know the precise time they should be tuned in to watch it.

Posting that time 10 days in advance would be a bit strange given how Epic has handled virtual concerts in the past, but Ariana Grande would also be one of the biggest stars to ever appear on the platform if she ever does. So we think this timer relates to a live event, but tying it to a concert is not entirely out of the question either.

Better yet: Why not both?