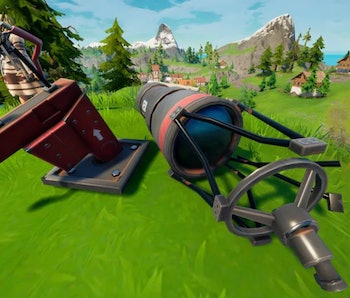 Fortnite’s Foreshadowing Quests have finally begun, with the first two challenges asking players to repair damaged telescopes and investigate a downed black helicopter. In this no-nonsense guide, we’ll show you how to get both challenges done quickly and easily to further fill out your Season 6 Battle Pass.

Where to repair damaged telescopes in Fortnite

There are many damaged telescopes scattered across the Battle Royale map, but this challenge requires finding and repairing five of them. Be aware, however, that you must first accrue at least 100 metal, as each one requires 20 metal to repair. Some have suggested completing this challenge in Team Rumble, as that mode automatically starts players off with a small collection of building materials. With that disclaimer out of the way, let’s get to the locations.

Location 1: Our first damaged telescope to repair is found on this hill east of Craggy Cliffs.

At this location and all telescope locations, your best bet is to look for a small stool, a cooler, and the telescope’s broken husk nearby.

Location 2: The second damaged telescope is on this ledge northwest of Dirty Docks. You may want to use the blue house to the east as a frame of reference.

This is what the location looks like when you land there.

Location 3: There’s another damaged telescope situated on the edge of this snowy peak south of Retail Row.

Given that the mountain is a bit secluded, it should stick out from its surrounding environment.

Location 4: The fourth damaged telescope to repair is nestled on this ledge southeast of Catty Corner.

You’ll find it in a clearing overlooking the ocean.

Look for this hill overlooking a small building. Just repair these five damaged telescopes, and the easy Battle Pass XP is yours.

Where to find the downed black helicopter in Fortnite

Once you repair the telescopes, you’ll then receive a quest to investigate a downed black helicopter. There’s only one of those on the Battle Royale map, and it’s nestled in the trees here, close to Lazy Lake and its corresponding islands. If you have trouble pinpointing it, just look for the black smoke in the sky.

When you get to the downed black helicopter, you should be able to interact with it to tune its radio. We just messed around with the plus and minus buttons a few times to receive the full message. Apparently, the Imagined Order is messing with corn stalks in the area. That’s likely a mystery we’ll learn more about as additional Foreshadowing Challenges become available.

Repairing damaged telescopes and investigating a downed black helicopter amount to two of the five known Foreshadowing Challenges expected to debut in Fortnite in the coming days. Currently, only the first two quests are available to complete, with no in-game indicator for when the rest we’ll release. For now, though, here’s a sneak peek at the challenges to come.

That’s all we know about Fornite’s Foreshadowing quests for now.